Today I welcome Mickie B. Ashling to the blog to share new MM Fantasy novel A Tangled Legacy. 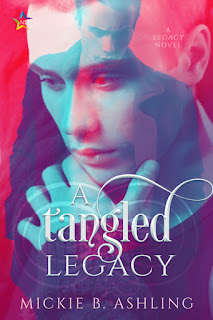 Prince Colin of Sendorra would have been the spare instead of the heir if fate hadn’t intervened. Like his father and forefathers, Colin is expected to marry and father a child or his principality reverts to Spain at the time of his death. Filling the royal nursery with healthy babies seems easy enough until Princess Charlotte—his childhood friend and intended bride—breaks off their engagement.

Nobel Prize winner—and powerful gray witch—Alain de Gris isn’t looking for love. Science and research have taken center stage for years until he walks into a club and lays eyes on Colin, thirteen years his junior.

Bisexual by nature, Colin seeks to avoid another engagement repeat by shying away from a same-sex relationship. There are no acceptable alternatives to provide legitimate offspring if he follows his heart.

But Colin can’t stay away from Alain and the witch finds him irresistible. Ignoring the absolutes isn’t easy when a legacy is in jeopardy. And while magic may offer a solution, it could also create more problems.

A Tangled Legacy
Mickie B. Ashling © 2018
All Rights Reserved

I slipped through a break in the eight-foot hedge that separated my granny’s rose garden from our garage. It was the same gap I used whenever I snuck out of the palace. Familiar with the prickly branches, I knew how to get through without a tear or a scratch. My bodyguards would be frantic the minute they realized I was missing, but the chance to sample nightlife as an ordinary man instead of a prince was too tempting.

Saddled at birth by a title I didn’t deserve, I’d spent all my life trying to convince everyone, myself included, that I had a right to exist. It wasn’t my fault that my twin, older by five minutes and thus the legitimate heir apparent, had been stillborn. Survivor’s guilt weighed heavily on my psyche, although it was pure chance that he died and I didn’t.

More than likely, the problem had lain with my method of conception. That story was glorified in the annals of our nation’s history. Male pregnancy had been risky from the word go, and no one knew this better than the man who gave me life, my father’s consort, Errol, the Duke of Maitland. He was a commoner who’d received the title after he married my other father, Prince Sebastian, who was heir apparent at the time. They’d been delighted to welcome me into the world, but it had been bittersweet after they were informed that my brother hadn’t made it.

Nonetheless, I was loved and pampered from the moment I first opened my eyes. Everyone doted on me, and I had a wonderful, albeit lonely, childhood. Once in a rare while, someone heartless would point out that I was the spare who’d usurped his brother’s title, but the incidents were few and far enough apart to be ignored.

Of course, no one bothered to ask me how I felt about having two dads and no mother. Not that they were bad parents—far better than most, or so I’d been told—and my granny, the Dowager Princess Alexandra, and her ladies-in-waiting provided all the feminine influence I could possibly need, but that didn’t stop me from wondering if I’d be a different person had I been created conventionally.

As things stood, I was determined to cram as many life experiences as possible before assuming the throne. Hopefully, my father, the current ruler, would live well into his seventies so I could achieve my goals. Since my twin was watching me from somewhere beyond these earthly boundaries, I wanted him to take comfort knowing I was doing a fine job with the role I’d unintentionally usurped.

My red Beemer purred to life, and I inched my way out of the garage, hoping no one would hear the engine. Most of the staff had already gone for the day. It was late, way past dinner, and the odds of being stopped were slim. Thankfully, my exit was uneventful.

I drove slowly until I hit the open road and gassed the engine when the palace faded from view. Dancing was on my mind, and the songs blaring from my radio helped to put me in the right mood. Since I had succeeded in a clean getaway, I decided on something different tonight. There was a new club in town—one that catered to a sexually fluid crowd—and this would be the perfect opportunity to check it out.

Mickie B. Ashling is the pseudonym of a multifaceted woman who is a product of her upbringing in multiple cultures, having lived in Japan, the Philippines, Spain, and the Middle East. Fluent in three languages, she’s a citizen of the world and an interesting mixture of East and West. A little bit of this and a lot of that have brought a unique touch to her literary voice she could never learn from textbooks.

By the time Mickie discovered her talent for writing, real life got in the way, and the business of raising four sons took priority. With the advent of e-publishing—and the inevitable emptying nest—dreams of becoming a published writer were resurrected and fulfilled in April 2009.

Mickie discovered gay romance in 2002 and continues to draw inspiration from the LGBTQA community and their ongoing struggle to find equality and happiness in this oftentimes skewed and intolerant world. Her award-winning novels have been called “gut-wrenching, daring, and thought provoking.” She admits to being an angst queen and making her characters work damn hard for their happy endings.