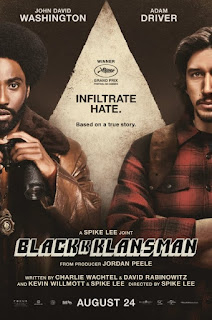 Ron Stallworth, an African-American police officer from Colorado, successfully manages to infiltrate the local Ku Klux Klan with the help of a white surrogate, who eventually becomes head of the local branch. (IMDB Synopsis)

Anyone who knows me well will know I tend to avoid any kind of political discussion online. The words 'open', 'can', and 'worms' come to mind. However, I don't think it's possible to review a film like BlackkKlansman without at least a brief mention of the politics within it. Obviously, this film revolves around the infiltration of the Ku Klux Klan. However, what I admired most was the way it acknowledged there could be extremism on both sides, with talk (though never acted upon) of the shooting of racist cops. I think this film is timely. In this day and age, you would think we could all live together in equality and peace, and if left to the majority, maybe we could. Sadly there are always extremists, and they can come from any side.

So, with the politics dealt with, let me continue the review from a more general stance. What I thought worked well in BlackkKlansman was the balance of drama and humour. The latter tended to veer towards the black side of comedy, but there were a number of moments when all of us in the audience laughed out loud, only to be hit by an emotional or dramatic moment in the next scene, sometimes in a way that made one uneasy about having laughed before (which I believe was completely intentional). Excellent performances from John David Washington and Adam Driver propelled the story forward, and I loved the cinematography. The static facial close-ups during Kwame Ture's speech were particularly effective. My companion questioned the need for the final pieces of footage. However, I believe they were important as they showed that these issues are not in the past but are still present in society today. They emphasised the movie's relevance.

All up, I found BlackkKlansman both entertaining and thought provoking. Would I watch it again? Yes. Would it be one I'd frequently re-watch? Maybe not. But it's certainly a film I am glad I got to experience at least once.

I received a free reviewer's pass to this movie courtesy of Palace Nova.