Today I welcome August Li to the blog to answer a few questions for Author Interview³.

1) Tell us 3 fun facts about your writing history
I used to write manga and comic scripts. I learned a lot through it, and it was pretty lucrative. That counts as two, right?
I put Easter eggs in almost all my books, sometimes references to my work, my friends’ work, or things I admire. They are often very sneaky.

3) Name 3 of your literary influences
The great British comic book writers—Alan Moore, Neil Gaiman, Grant Morrison
Classical literature—Euripides, Sophocles, and the rest probably influenced my subconscious way more than even I realize. Ovid. Love that guy.
Since there’s obviously way more than three, I change this up every time I answer this question, and I’m feeling Murakami right now.

4) Share your 3 favourite books
This is the hardest question ever, and again, with the exception of the first one, it changes based on my mood.
Jonathan Strange and Mr. Norrell
The Blade Itself
Prince of Thorns

5) What are your 3 essential writing tools?
I don’t have three. Just the MacBook. Sketch pad is a bonus. Splitting hairs, but I guess an internet connection to do research.

6) Where are your 3 favourite places to write?
The thing I like most about being an editor and author is the freedom to travel, so I have written and worked in many different countries. I just saw a hostel on Santorini that’s an old winery with rooms in cellars and caves. That’d be cool.

7) Name 3 items on your writing wish list
I definitely want to write more trans and nonbinary characters. As a trans person I was hesitant to do so for a while, but then I wrote Jet, thoroughly enjoyed them, and can’t wait to do more. I’d like to do something that could combine writing with my visual art—maybe a graphic novel or something illustrated. Lastly, just inspire people to question authority and resist oppression.

8) What are your top 3 tips for aspiring writers?
Learn craft and the history of craft. Not that you have to adhere to it strictly, but a lot of this stuff has persisted centuries for a reason. Similarly, learn as much as possible about grammar. You have to know the tools available to you, and the better you become with those tools, the more expert and polished the finished product. Read things you normally wouldn’t. It’s good to be uncomfortable and off-balance sometimes. If it evokes a reaction, that creator did something right.

9) Tell us 3 of your writing plans for the year ahead
A paranormal romance set among the Egyptian Bedouin is coming early 2019. Nomad’s Dream is in edits now. I’m currently writing the sequel to Incubus Honeymoon. I don’t know after that. It’ll be guided by either internal or external pressure. Oh! I have a holiday story out in December at Dreamspinner. Colina de Lavanda is part of the Advent collection, and it’s a weird Western/paranormal romance.

10) Tell us about your latest release
Incubus Honeymoon is a gritty urban fantasy with a diverse cast of queer characters from different cultures who fight secret societies, corrupt mage guilds, neo-Nazis, and, to an extent, each other. Not a romance, but there’s lots of action, intrigue, mystery, and cats! One Amazon reviewer called it “a fairy tale with gun fights.” 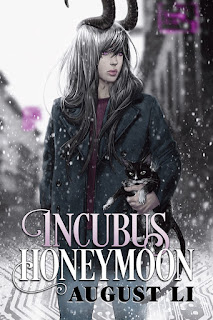 As the so-called magical creatures go, I’m low on the hierarchy, and my powers aren’t much good to human mages. I’m a lover, not a fighter, through and through. I’m also selfish, lazy, and easily bored. But I’m damned good at what I do.

Too bad that won’t get my arse out of this sling.

Do one—granted, uncharacteristic—good deed, and now I’m held hostage to an arrogant faerie prince, trying to track down the one who summoned him while dodging gangbangers, gun runners, and Nazis. Add the powerful mage guilds scrambling to gather firepower for some doomsday event they’re sure is around the corner, and my cushy life of leisure might be nothing but a memory. On top of that, something’s compelling me to change on my most fundamental level. I’m not sure what I’ve got myself mixed up in, but nothing will ever be the same. 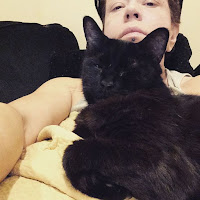 About the Author
August Li plays every game as a mage. He thinks the closest thing to magic outside of games and fantasy is to bring things into existence from nothing, which he does in words and images. As a proud trans man, he hopes to bring diversity and representation to all those who want to see themselves in the art and stories they enjoy. He’s a perfectionist, travel enthusiast, and caffeine addict.
Gus makes his home on the coast of South Carolina, where he spends his days in search of merpeople, friendly cats, and interesting pieces of driftwood. He collects ball-jointed dolls, tattoos, and languages. He believes in faeries and thinks they’re terrifying… but still wants to meet one.