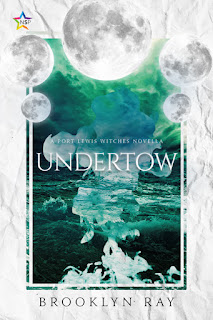 Port Lewis, a coastal town perched on the Washington cliffs, is home to Crescent Cafe, a slew of micro-breweries, a downtown packed with antique boutiques, and violent, ancient storms. Thunder shakes rooftops and lightening cuts through dark skies, but Liam Montgomery has never been afraid.

One night, Liam hears the scream of a kelpie, a Water horse whose cry foretells the beginning of a prophecy. Kelpies have not set foot on shore for decades, but as Liam digs into his magic and his family’s history, he uncovers a mysterious secret that could ripple into the lives of everyone around him.

Liam’s tea-leaves spells out murder. The life of someone he loves is on the line. An unwelcome kelpie speaks in riddles. The Queen of Water demands a sacrifice.

The Montgomery name is soaked in blood and secrets. Liam’s fate is sealed, but he’ll do whatever it takes to change it—even if it risks his circle, his magic, and his life.

The ocean swept around Liam’s ankles. Night hovered over the water, turning what was left of the day into a washboard of dusty rose and deep violet. Sea foam dampened his calves. He rolled a smooth, gray stone in his palm.

Magic made itself known, a current wound tight in his core, churning blood and flexing bone. Uncertainty misted his cheeks, stung his eyes, and even when he willed it away, it clung to him. All magic was different—Fire, Earth, Air—but Water was something else entirely. It waited for no one. When it took, it took completely. When it gave, it gave until it hurt. Liam wasn’t used to being volatile, but tonight his magic thrashed within him, whispering lies about power and promises about the deep.

Warm fingertips followed the ridge of his knuckles and slid over the stone he kept worrying in his right hand. Ryder’s energy blistered and taunted. Its darkness had an unmistakable heartbeat, a tantalizing, insidious taste that Liam still wasn’t quite used to. A hot breath hit Liam’s neck and he closed his eyes.

“You’re still out here,” Ryder said. His lips touched the shell of Liam’s ear and Liam was reminded that unknowable was a useless label with Ryder Wolfe, who knew him like clouds knew rain and foxes knew forests.

Ryder was one of those beautiful, awful things. He might’ve been the most beautiful. The most awful.

Liam leaned back until his spine met Ryder’s torso. “Where else would I be?”

“I can think of a few places.” Ryder’s lips curved into a smile against Liam’s neck. A long, pale index finger traced the veins in his wrist to his thumb, over his knuckles and back again. “Labradorite.” He touched the smooth surface of the stone and hummed appreciatively when Liam let him pluck it from his palm. “The stone of transformation?”

“Yeah, figured it might be worth a try.” Liam tilted his head until Ryder’s lips were close enough to catch. He kissed him gently, a soft press and nothing more. “How’s Jordan?”

“Ruthless,” Ryder said through a groan. “I didn’t think being a necromancer would be this difficult or require a fuck-ton of studying. How’s the ocean?”

Liam smirked. He flicked his gaze to the sea and said, “It’s ruthless too.”

“Anything new out here?” Ryder’s chin settled on Liam’s shoulder. “Merfolk stealing babies in the night?” he mused playfully. “Selkies and sirens arguing over meals?”

“Selkies don’t eat people,” Liam corrected. “And no, there’s nothing new out here. Not yet, at least.”

Brooklyn Ray is a tea connoisseur and an occult junkie. She writes queer speculative fiction layered with magic, rituals and found families.