Today I welcome Amy Aislin to the blog to answer a few questions for Author Interview³.

1) Tell us 3 fun facts about your writing history
The first story I ever wrote was in 4th grade, during a rained-out recess. It was about a treasure hunt!
My first published book, The Play of His Life, was actually the second one that was accepted for publication.
My sweet, May/December Christmas romance coming out this November, Christmas Lane, almost turned into a raunchy m/m/m!

3) Name 3 of your literary influences
Suzanne Brockmann, the master of the deep POV.
TJ Klune, the king of tension.
Anyta Sunday, the queen of banter.

4) Share your 3 favourite books
Um, I have way more than 3. Can I share my top 3 this year?
Honey From the Lion by Jackie North.
Imperial Stout and Craft Brew by Layla Reyne (I know that’s two books, but they’re part of the same series, so I’m counting it as one).
Syncopation by Anna Zabo.

5) What are your 3 essential writing tools?
Scrivener
The Emotion Thesaurus by Angela Ackerman and Becca Puglisi (basically all of the thesauri at www.onestopforwriters.com)
Master Lists for Writers by Bryn Donovan

6) Where are your 3 favourite places to write?
I honestly don’t have a favourite writing place. I can write anywhere as long as I know I won’t be interrupted for a while.

7) Name 3 items on your writing wish list
A paranormal romance. I have the idea for one in my head, but it’s not fully fleshed out yet.
Urban fantasy. I love everything to do with magic.
Partners to lovers. It’s one of my favourite tropes, but I haven’t written it into any of my books yet.

8) What are your top 3 tips for aspiring writers?
Write what you want, not what someone else thinks you should.
Don’t let anybody rush you; write on your own timeline.
Always have your work edited and proofread prior to publication. Reviewers will find the errors.

9) Tell us 3 of your writing plans for the year ahead
I have a new novel, the sweet, May/December Christmas romance mentioned in question 1 above, Christmas Lane, releasing on November 29! Pre-orders are up here: http://bit.ly/XmasLane
I have a Christmas short story that will be available for free sometime in December and will feature my main characters from On the Ice.
I’m working on a young adult romance that I hope to release sometime in the first few months of 2019.

10) Tell us about your latest release
The Heights is an m/m contemporary romance about a big city dancer who moves to a small town in coastal Oregon to be closer to his brother. There, he meets a grumpy woodworker who won’t even smile at him and discovers something about his past that changes his entire life. 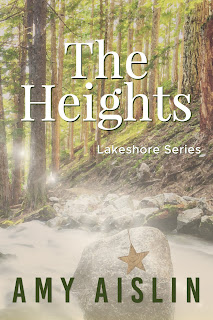 Potential trigger warning: one of the main characters suffers from panic attacks

Twenty-one years ago, a four-year old child was kidnapped from his front yard. He was never found. Until now.

All Nat Walker wants is to make his late father’s dream of running a father/son woodworking shop come true. And he had the perfect building in mind—until the new guy in town came in and bought the place right out from under him. The fact that the new guy is adorable means nothing. For all Nat cares, he can take his new dance studio and waltz back to New York City.

Professional dancer Quinn Carroll couldn’t be happier that he made the move to the small town of Lakeshore, Oregon. Sure, it’s not New York, but now he’ll be living closer to his adoptive brother. And since his studio will be the only one in the area, he should get enough business to keep him busy. Besides, there’s something about this place that seems familiar...

He doesn’t expect to fall hard for the local, grumpy woodworker who won’t even smile at him.

Or find out that his entire life is a lie.

“That’s also the most I’ve heard you talk since we met.”
He removed his stick from the fire and let his burned marshmallow cool. “I talk.”
“Not much.” Quinn assembled a second s’more and ate it in short order. “But that’s okay. You talk when it matters.”
Nat froze with the marshmallow halfway to his mouth.
Aloof. Uncommunicative. Grumpy. Words that had been used to describe him at various times in his life by people who hadn’t made an effort to get to know who he really was.
Quinn had him pegged in only a couple of weeks?
He ate his marshmallow, chewing slowly, half an eye on Quinn. Quinn, who was adorable and sweet and charming but who Nat had judged as flaky and immature. Turned out he was smart and exceptionally astute.
Quinn assembled yet another s’more, his foot tapping in tune to whatever song played in his head. Jesus, did he never sit still? The fingers of one hand drummed on his thigh as if playing a mental piano even as he attempted to eat a s’more one-handed.
He was like a coiled spring, tightly wound. What did Quinn do to expel all that energy besides dance? Soccer? Running? Hockey?
Sex?
Nope. Not going there.
Except now that his brain had gone there, it didn’t want to go anywhere but there.

Amy started writing on a rainy day in fourth grade when her class was forced to stay inside for recess. Tales of adventures with her classmates quickly morphed into tales of adventures with the characters in her head. Based in the suburbs of Toronto, Amy is a marketer/fundraiser at a large environmental non-profit in Toronto by day, and a writer by night. Book enthusiast, animal lover and (very) amateur photographer, her interests are many and varied, including travelling, astronomy, ecology, and baking. She binge watches too much anime, and loves musical theater, Julie Andrews, the Backstreet Boys, and her hometown of Oakville, Ontario.