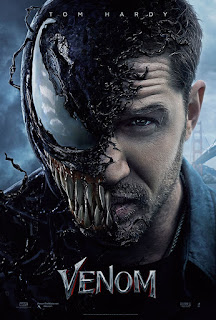 When Eddie Brock acquires the powers of a symbiote, he will have to release his alter-ego "Venom" to save his life. (IMDB Synopsis)

The idea of Venom really appeals to me. I love stories where there is some form of 'possession', with two people inhabiting a single body. It provides so many wonderful possibilities. I was, therefore, predisposed to like the story and character, and overall, I did find this a fun and enjoyable film. However, I can't help but feel it could have been so much more. In the ten years of MCU, superhero movies have come a long way, but to a certain extent, this felt like a step back to those of the late 90s/early 00s, with only average effects, cheesy dialogue (especially some of Venom's lines), and underdeveloped characters. I have heard that Tom Hardy is upset over material that was cut, and I would be interested to see those missing scenes. In particular, I would have liked more interaction between Eddie and Venom, so we could see what made Venom change his intentions. He tells us Eddie is the reason. But why? I also think that, with a character such as Venom, they should have gone a little darker. The success of Deadpool proved that a film with an R rating could still be a smash hit, and I do think Venom would have benefited from a darker approach, better effects, and deeper character work. It wasn't a bad movie, and I don't think it deserves all the negative comments that have been thrown at it; nonetheless, I can't help but think that it's a good film that missed out on being great due to some poor decisions.