Today I welcome Tash McAdam to the blog to answer a few questions for Author Interview³.

1) Tell us 3 fun facts about your writing history
I basically started writing because my now-fiancée dared me to. I name my characters after my students (mixed up first and surnames though!). I once wrote 14,000 words in one sitting without standing up and then when I did stand up I fell right back down again.

5) What are your 3 essential writing tools?
Computer, bed, coffee

6) Where are your 3 favourite places to write?
In bed. I’m a bedwriter. Also, at my favourite coffee shop with the window facing Commercial Drive (amazing people watching), and I guess at my desk although to be quite honest I do not really write there very often. I hate sitting in chairs.

7) Name 3 items on your writing wish list
I’d love to get an agent for my next series. I want to try writing something contemporary. Uhh... I guess every single author ever wants this but a T.V adaptation of the Psionics series is probably top of my dream-wish list.

8) What are your top 3 tips for aspiring writers?
Write. Write often and write plentifully. Write short stories and submit them while you’re working on your longer projects- it’s rewarding, it’s good practise, and you’ll make connections in the industry. Ignore extraneous things like spending hours on pinterest making moodboards, your book won’t exist if you don’t finish it.

9) Tell us 3 of your writing plans for the year ahead
It’s actually a BIG year for me! I have FIVE novels coming out in the next twelve months, which is an entire series and then the first book in another series. I also have just been contracted for a super exciting project that I’m not allowed to talk about yet but comes with a scary deadline, I have a contracted novella waiting for edits, and a short story that’s out on submission right now. In amongst all that I really want to finish writing two new novels--the sequel to my Dec 2019 release, Warp Weavers: Light in the Blood, which is a Buffy meets Dr Who dimension-ripping urban fantasy, and another novel that’s post AI apocalypse Sci-Fi. I’m getting overwhelmed making this list!

10) Tell us about your latest release
I am the Storm is a YA SF dystopia superhero novel. It follows two young telepaths in totally different circumstances as they try to evade the government agency hunting for them. Sam is a technopath, able to control technology with his mind, and he’s been living unnoticed for years... which changes at the beginning of the story. Serena is a newly qualified rebel soldier who was raised underground, among the resistance. Sam is on the run, and Serena is trying to track him down before the Institute does. As a queer and trans author, I write stories that centre marginalised identities while not focusing on the Struggle of being marginalised--something I am very bored of reading about as well as living, thanks. I want to see people like me at the front and centre of action-packed stories that are plot based and character driven, so that’s what I write. 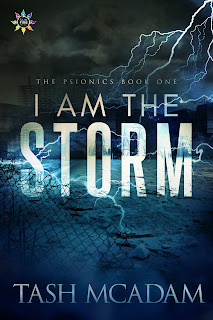 Keep your head down. Don’t look anyone in the eye. Never even think about technology if one of those ghostly, grey cars is sliding silently down the road. They'll see the thoughts inside you, if you let them.

Sam's a technopath, able to control electronic signals and manipulate technology with his mind. And so, ever since childhood, his life has been a carefully constructed web of lies, meant to keep his Talent hidden, his powers a secret. But the Institute wants those unusual powers, and will do anything to get a hold of him and turn him into one of their mindless slaves.
Sam slips up once. Just once, but that's enough. Now the Institute is after him in full force. Soldiers, telekinetics and mind readers, all gunning just for him.

Newly qualified rebel soldier, Serena, doesn't even know she's chasing a person, all she knows is that she has to find whatever the Institute is after before they do. But, tracking an unknown entity through an unfamiliar city, with inaccurate intelligence, unexpected storms, and the Watch on the prowl, will she even survive? Will she get to Sam before the Institute does? His special skills could provide the resistance with an incredible advantage, but not if they can't get out of the city, and over the huge wall that stands between them and freedom. 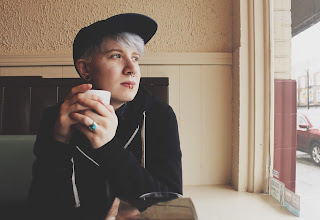 About the Author
Tash is a Computer Science and English teacher in Canada, although they were born and raised in the hilly sheepland of Wales (and have lived in South Korea and Chile before settling down in Vancouver). Tash identifies as trans and queer and uses the neutral pronoun 'they'. As an English teacher they are fully equipped to defend that grammar! They have a degree in computer science so their nerd chat makes sense, and a couple of black belts in karate which are very helpful when it comes to writing fight scenes.

Their novel writing endeavours began at the age of eight, although they will admit that their first attempt was derivative, at best. Since then, Tash has spent time falling in streams, out of trees, juggling, dreaming about zombies, dancing, painting, learning and then teaching Karate, running away with the circus, and of course, writing.

They write fast-paced, plot-centric action adventure with diverse casts. They write the books that they wanted to read as a queer kid and young adult (and still do!)