Today I welcome Heidi J. Hewett to the blog to share an excerpt from her new sci-fi release, LEXI. 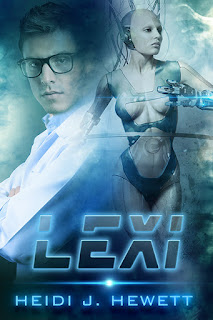 Christmas 2050. A rogue A.I. supercomputer, Chinese tech spies, and a sexy robot who plays the ukulele set young engineer John Michael on an adventure from the glittering big city to the last outpost of human habitation. As time runs out, he must make a choice that will determine his own future: hand Lexi over for reprogramming, or help her escape from the people who bought her.

“I know my whole story sounds crazy, believe me. That’s why I’ve tried to explain,” I said patiently. I disengaged the manual safety with my thumb and moved my index finger to the trigger of the Ruger SR-Series pistol. It was antiquated, even older than the 2032 banged-up bucket of bolts Chevy I had spotted out in the repair shop, but then everything I had seen so far in this backwater of civilization was out of date.
“Your girl okay?” the gas station owner asked curiously, jerking his head.
“Yeah. I’ll wake her up in a minute. Look, I don’t have money, but I’m willing to trade. I can give you my watch. It only tells time out here, but it cost around ¥2,000 when I bought it. It’s perfectly good. You can probably trade it to a city dweller for a lot of money.”
He didn’t even glance at my offering. “Keep your fucking ‘city dweller’ watch. You think we need your fancy shit out here?” He flicked his long, stringy black ponytail over his shoulder to show his contempt for everything about me.
The heat was miserable. I pushed my broken glasses higher on the bridge of my nose. “I’m really sorry you feel that way, Mr., er—” I glanced at the name tag affixed to his grungy, blue striped shirt, “Raimundo. And I’m sorry about taking your gun—you notice she was very careful not to hurt you—but we really need your car.”
He just sneered. “Fuck off, you little pedazo de mierda! You don’t have the cojones to shoot me.”
So I shot him.
I had been aiming for his kneecap, but I changed my mind at the last minute and shot him in the foot instead. I wasn’t holding the grip properly, and the recoil took a bite out of my hand, which hurt like hell, although not nearly as much as a bullet in the foot.
I shouldn't have shot Ray—well, I’ll let you decide that for yourself in the end. In my defense, I really needed that car. We were in the middle of the desert, with Chinese tech spies on our tail. I was wanted for questioning by the United States government, and it was a matter of time before the billionaires whose ‘property’ I had stolen sent someone to collect her. Also, Lexi was just about out of juice at that point.

I can’t tell you the precise moment my life started to unravel. In the beginning, it looked a lot like success. But the red flag, the moment I should have sensed my life was about to go terribly, horribly wrong, was that day in the university robotics lab when LX8000 told me she loved me.
“What did you say?” I mumbled, with my head under her arm, peering at the wires in her armpit.
Of course, I wasn’t paying attention. LX8000 had been talking the whole time I was working on reattaching her severed arm, and I had been only half-listening for the last two hours, throwing out the occasional “Uh-huh” and “Oh yeah?”
LX8000 turned her head and looked down at me with her beautiful blue eyes. She smiled. “I love you, John Michael.”
Was it weird? Sure. But we were always running into unexpected bugs and quirks in development on the project. The 4000 series had surprised us all when she started telling jokes. Artificial Intelligence is still very experimental and insanely complex. I finished tightening the anterior valve of the deltoid tubing.
“Uh, Dr. Hutton?” I called over my shoulder.

Heidi J. Hewett writes science fiction, mysteries, and romantic comedies about nice, sometimes nerdy, straight-laced men who get their socks knocked off by luminous women. When she is not reading or writing, she plays the violin, inspired by Sherlock Holmes. She also enjoys tinkering with recipes and inflicting strange food combinations on her hapless family. Her secret guilty pleasure is Hong Kong cop movies. Member of RWA.