Today I welcome A. Nybo to the blog to answer a few questions for Author Interview³.

1) Tell us 3 fun facts about your writing history
• I was once congratulated heartily on winning a poetry competition. But the winner shared the same name as me (little wonder I didn’t recall writing the poem).
• The first ‘novel’ I wrote was an 800,000 word fantasy—which I threw away.
• In contrast my first ever publication was a novella.

3) Name 3 of your literary influences
Pretty much every book I’ve ever read has influenced me in some way. Today, these three came to mind.
• Colin Wilson
• Tony Hillerman
• Robin Hobb.

4) Share your 3 favourite books
• Liveship Traders (which is actually a trilogy but I can’t choose just one) by Robin Hobb
• Skinwalkers by Tony Hillerman
• Fear & Loathing in Las Vegas by Hunter S. Thompson

5) What are your 3 essential writing tools?
• Laptop
• Imagination (Luckily I’m not editing today—my brain just mixed up the first two items here and I ended up with ‘lamington’. Maybe that was just wishful thinking on my part.)
• Google

6) Where are your 3 favourite places to write?
• Lounge chair for the actual writing.
• Bed for the brainstorming.
• Out walking for the planning phase and troubleshooting.

7) Name 3 items on your writing wish list
• I’d like to co-write something—but I’m a really slow planner/writer.
• To have an audiobook of one of the novels I have coming out this year with all the different accents (Australian, Canadian, Russian, New Zealand).
• I’d like readers to enjoy my characters as much as I do.

8) What are your top 3 tips for aspiring writers?
• Read—a lot!
• Perseverance.
• Get a good (honest) critique partner.

9) Tell us 3 of your writing plans for the year ahead
• The release of a new novel mid-year.
• Complete 2 works currently in progress.
• I want to complete ONE of the series I’ve started (or at least come close).

10) Tell us about your latest release
The Devil’s Breath is a thriller-come-hurt/comfort mm romance. It went through a variety of incarnations before it became the story it now is. It is about Henri, a man who has come back from the edge and is doing his best to re-establish a ‘normal’ life. At times he thinks he’s his own worst enemy...until he discovers the enemy on his trail outclasses him in every sense of the word ‘worst’.  The love interest, Birch, jumps in to help, but the moment he discovers how weird Henri is, he tries to get away. Despite his kicking and screaming, Birch is inexorably dragged deeper into the mess. 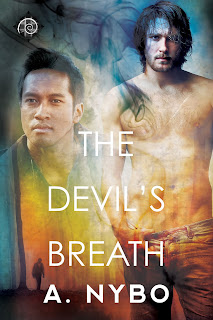 Dreamspinner / Kobo / B&N / Google Books / iTunes
Henri’s stalker has left him with a paradoxical legacy: his mind rebels at the thought of being touched—the very thing his body craves.

For three years Henri has fought to overcome the horrors of the past. Now on the other side of the world—after leaving Australia for Canada—Henri’s nemesis is hunting him with maniacal focus.

Trying to escape, he meets Birch, a kind horse trainer, who’s confounded by Henri’s idiosyncrasies even as he is drawn to him. But when Birch discovers the truth, he encourages Henri not to just survive, but to live.

Maybe even to love.

About the Author
A. Nybo has tried conventional methods (a psych degree and a GC in Forensic Mental Health) but far prefers the less conventional, such as the occasional barbecue in the rain, four-hundred-kilometer drives at 1:00 a.m. for chocolate, and multiple emergency naps in any given twenty-four-hour period.

Western Australian born, she has been spotted on the other side of the planet several times—usually by mosquitoes. She’s also discovered Amazonian mosquitoes love her just as much as they do in her home state.