Book Release Promo: Slammed into You by C.M. Valencourt (MM/Cont.)

Today I welcome C.M. Valencourt to the blog to share their new MM contemporary romance release, Slammed into You. 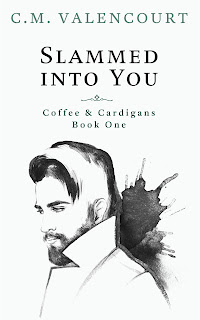 They were like two hurricanes, touching down on the same shore.

Amir is a rising slam poet who wants to make it big. While he works a day job at a café, he writes poems like his life depends on it and performs at a local poetry slam every week.

But then Landon comes to a slam, and he’s not impressed by Amir. When he joins the slam team, he jeopardizes Amir’s chance to go to Nationals, all Amir’s been dreaming about for the past year. He vows to show Landon that he is the better poet.

As Amir and Landon clash to get the last spot at Nationals, their bickering and attempts to undermine each other quickly turn into angry lust. Amir’s priority is to win, but he can’t seem to get Landon out of his head...


Excerpt
He wasn’t expecting to find Landon in the hotel room when he unlocked it. But there he was, pacing back and forth in front of the beds, his footfalls heavy. Amir quietly closed the door behind him, and Landon didn’t notice as he stepped into the room.

He had unbuttoned the pink shirt, revealing a heather grey muscle tank underneath. His shoes were still on and there was no doubt he was bothering the people in the room below them. But as he turned on his heel again, this time facing Amir, he could tell he was absolutely livid.

“No, you’re not,” Landon bit back. “You just want to hear me say it. That’s why you followed me back.”

Landon chuckled darkly. “That you were right! That I shouldn’t have done that poem at all!”

Amir looked right at him. He tried to be diplomatic. “I think it can serve as a learning experience.”

Landon shook his head. “God, just tell me off already!” His voice was growing louder with every word he spoke. “Blame me for crushing your dreams. I can take it.”

“You need to chill the fuck out. I’ll leave.” But Amir didn’t move.

Amir almost asked what, but he knew what he was talking about. The constant conflict between the two of them, the way they were at each other’s throats all the time. But Amir didn’t really think Landon was in the mood to build bridges.

“Fine. Here it is. Maybe if you’d just listened, you wouldn’t need to be so pissed off at me! You could have done your other poem, and we could have won the whole damn thing!”

“Who else would I blame?” Amir asked, feeling his own temper begin to build. “Everyone else got decent scores except for you!”

Landon took two steps forward towards him. “I know. I should have listened to the All-Knowing Amir! If only you’d shown me the way!”

Amir stepped forward, too. They were only about a foot apart now. “But you can’t deny I was right! You weren’t confident in that poem, didn’t know it as well. You didn’t even know it well enough to remember the goddamn words!”

Then Landon’s finger was jabbing into his chest. Amir was surprised that the distance between them had closed. Despite himself, he could feel how close Landon was, thinking of the scene at the club.

Without even thinking about it, he leaned in and kissed him, the need too great. Landon was still so warm, though this time it was probably from righteous fury. Landon was stock still for a few seconds before he pushed him backwards, just enough so their bodies were no longer touching.

“Fuck you,” Landon said, but this time he wasn’t yelling. His voice was almost a whisper.

Then he grabbed Amir’s shirt collar and pulled him back in, kissing him roughly. 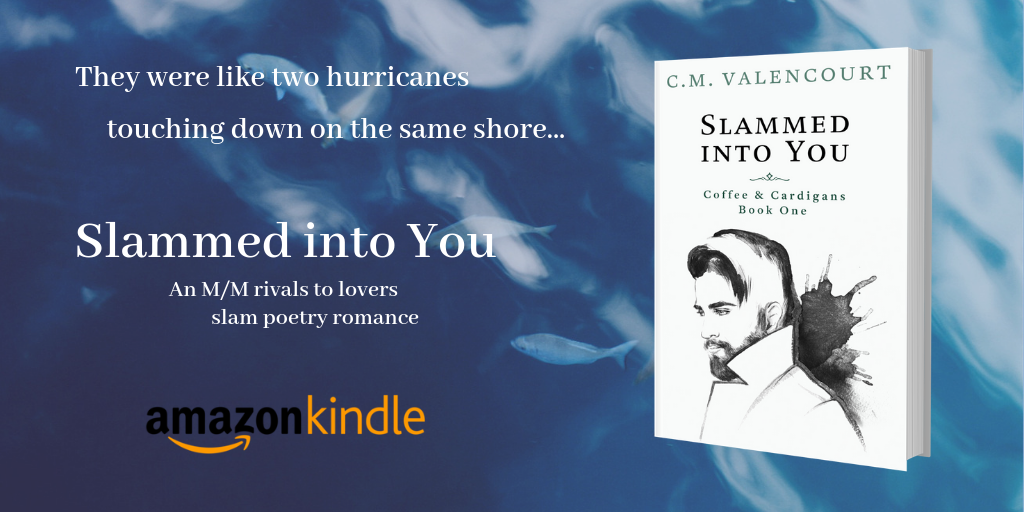 C.M. Valencourt is a new m/m romance author. They started devouring queer fiction when they still had to smuggle it into their parents' Catholic household, and dreamed of writing books about queer people finding love ever since. They like figure skating, ghost hunting shows, and Carly Rae Jepsen.

You can find out more about their books and learn about upcoming releases at cmvalencourt.com.