What's your favourite bookish accessory that's NOT a book?
To be honest, I don't have much, except for my bookmark collection, and I do love that. I have tons, and I adore them too much to use most of them, so I tend to keep them all in a box and just make use of the free ones from The Book Depository (but only double-ups, naturally).


From page 56:
Camille could practically see the wheels spinning in Sophie's head. Here she was, rescued by a nobleman with a fine nose and golden eyes. 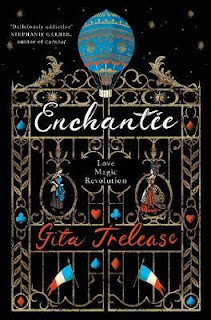 Paris in 1789 is a labyrinth of twisted streets, filled with beggars, thieves, revolutionaries—and magicians...

When smallpox kills her parents, Camille Durbonne must find a way to provide for her frail, naive sister while managing her volatile brother. Relying on petty magic—la magie ordinaire—Camille painstakingly transforms scraps of metal into money to buy the food and medicine they need. But when the coins won’t hold their shape and her brother disappears with the family’s savings, Camille must pursue a richer, more dangerous mark: the glittering court of Louis XVI and Marie Antoinette.

With dark magic forbidden by her mother, Camille transforms herself into the ‘Baroness de la Fontaine’ and is swept up into life at the Palace of Versailles, where aristocrats both fear and hunger for la magie. There, she gambles at cards, desperate to have enough to keep herself and her sister safe. Yet the longer she stays at court, the more difficult it becomes to reconcile her resentment of the nobles with the enchantments of Versailles. And when she returns to Paris, Camille meets a handsome young balloonist—who dares her to hope that love and liberty may both be possible.

But la magie has its costs. And when Camille loses control of her secrets, the game she's playing turns deadly. Then revolution erupts, and she must choose—love or loyalty, democracy or aristocracy, freedom or magic—before Paris burns…