Today I welcome r. r. campbell to the blog to answer a few questions for Author Interview³.

1) Tell us 3 fun facts about your writing history
• My first foray into fiction was in fifth grade, when I wrote a weekly serial about a man named Albert who was stranded on a desert island and had to conform some generally wacky circumstances. It was basically just an adaptation of the lyrics to Weird Al’s “Albuquerque,” but my classmates seemed to enjoy it at the time anyway.
• I started to take my writing more seriously after a volunteer program I was part of in Brazil went awry. Instead of teaching Spanish and English to university students, I ended up learning Portuguese and writing a book. Not a bad trade-off.
• It took me five years to get Imminent Dawn, the first book in my epic EMPATHY sci-fi saga, just right for publication. I then only had five months to get its sequel, Mourning Dove, in shape for publication in April 2019!

3) Name 3 of your literary influences
I’d say these authors had the biggest impact on the shape of the EMPATHY series or elements thereof.
• George R. R. Martin
• Hugh Howey
• Malka Older

4) Share your 3 favourite books
I’m not one to log favorites (seriously, I don’t even have a favorite color or food), but these are books or series I’ve come back to over the years.
• Cloud Atlas by David Mitchell
• The MaddAddam Trilogy by Margaret Atwood
• A Song of Ice and Fire Series by George R. R. Martin

5) What are your 3 essential writing tools?
• Coffee (cliché, I know, but here we are)
• A good soundtrack or other music without words
• Google Drive + Scrivener

6) Where are your 3 favourite places to write?
• My desk! I recently moved and have a new office now. Let me tell you—there’s really something to be said for having a dedicated writing space, and this new one is glorious.
• I live near a handful of lakes, and I used to visit some of them regularly to reflect and take notes on writing-related matters. I might have to try out some of the lakes that are now nearer to me since I’ve moved!
• I’ve written on beaches and in northwoods cabins, but after a trip to Arizona last year, I’m now thinking I really want to visit again to try out some writing in the desert.

7) Name 3 items on your writing wish list
• I’m looking forward to writing some of the EMPATHY: Origins novels that will come out once the main series is complete.
• I’ve got big plans for a new speculative fiction/historical fantasy series that I want to start releasing as early as 2020, if I can swing it. It’ll be a divergence from EMPATHY, that’s for sure, but I’m excited to play around in this new world.
• I’m actively working to expand on my list of public appearances for 2019 and 2020. I’ve got a few conferences and other book events coming up this year, and I’d love to add more!

8) What are your top 3 tips for aspiring writers?
• If you can, schedule time to write. Once it’s part of a routine, writing becomes far less daunting.
• Join the writing community—online and in real life!
• Write first, edit later.

9) Tell us 3 of your writing plans for the year ahead
• The EMPATHY series is looking like it will have its first three installments published in 2019, and I’m really thrilled about that! I’ll be taking some time off from the series before writing books four and five, but it’ll be great to have the bulk of the series out by year’s end!
• I’ll be speaking at the University of Wisconsin Writers’ Institute in April 2019, and will also be leading an intensive session at AllWriters’ Workshop in Waukesha, Wisconsin in July of this year. Aside from those appearances, I’ve got a few more in the pipeline, but can’t say anything about them yet…
• One of my goals for 2019 is to also write a manuscript outside the EMPATHY-verse. I’ve got a few ideas to choose from; we’ll see which ends up calling to me most!

10) Tell us about your latest release
My latest release is Imminent Dawn, the first installment in my epic EMPATHY sci-fi saga. New York Times bestselling author Matt Forbeck has called it “an incisive techno-thriller that gets more tense with every page,” and author M.A. Hinkle has described it as “freaking sci-fi Game of Thrones.” It also debuted as the number one new release in LGBT sci-fi on Amazon, which I remain excited about.
Imminent Dawn is the story of an art-school dropout who enrolls in the first round of human trials for an internet-access brain implant with the goal of using it to connect with her comatose wife. Along the way, she’ll have to overcome the scheming of a ruthless tech magnate, a relentless investigative journalist, and an advancement-hungry administrative assistant who might bring the entire research study crashing down.
Since this is a multi-perspective novel, we get POV chapters for the art-school dropout as well as the other characters mentioned previously. If you like gritty, dark sci-fi, this book (and the series as a whole) will be for you.
I’m also thrilled to announce book two in the series, Mourning Dove, will be released with NineStar Press in April 2019! For the most up-to-date information on the series, you can visit empathyseries.com. And don’t forget to add the books on Goodreads! 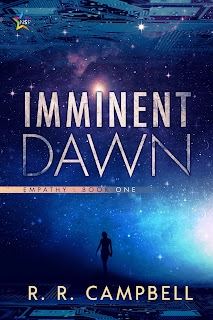 Art-school dropout Chandra would do anything to apologize for her role in her wife’s coma—including enroll in the first round of human trials for an internet-access brain implant.

At first, the secretive research compound is paradise, the perfect place to distract Chandra from her grief. But as she soon learns, the facility is more prison than resort, with its doctors, support staff, and her fellow patients all bent on hatching plots of their own, no matter how invested they might seem in helping her communicate with her wife.

Making matters worse, a dark wave of uncertainty crashes down on the compound, forcing Chandra to become an unlikely but pivotal player in conspiracies stretching from the highest levels of the North American Union government to the lowest dredges of its shadowy hacking collectives.

To save herself and her wife, Chandra and her newfound friends from the study will have to overcome the scheming of a ruthless tech magnate, the naïveté of an advancement-hungry administrative assistant, and the relentless pursuits of an investigative journalist, all of whom are determined to outpace the others in their own quests to resurrect lost love, cover their tracks, and uncover the truth. 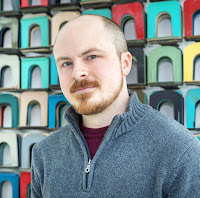