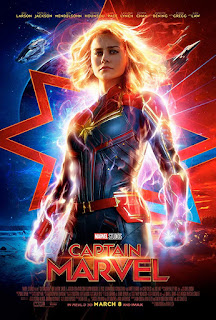 Carol Danvers becomes one of the universe's most powerful heroes when Earth is caught in the middle of a galactic war between two alien races. (IMDB Synopsis)

Captain Marvel is a great new addition to the MCU. Marvel hasn't yet put out a film I haven't liked. Perhaps this one wouldn't make my MCU top five, but it's still a solid offering, with some excellent action sequences and Marvel's trademark bursts of humour. I enjoyed Larson's performance in the lead, and it was fun to see a younger Nick Fury in action. I particularly appreciated Jude Law as Yon-Rogg (but I like Jude Law in anything, so that's a given); however, it was Goose who stole the show. No spoilers, but I did not see that coming! All up, an entertaining movie and one I'll look forward to watching again once the DVD releases. You could watch this with no knowledge of other MCU films, but you'll get more from it if you understand all the references.