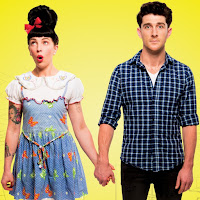 When 12 people live under the same roof in a converted warehouse in North London, what could possibly go wrong?

In this hysterical musical parody cabaret, Lala Barlow and Robbie Smith are two wide eyed koalas fresh off the boat, looking for the perfect place to call home. Over 60 minutes, relive their year living at Daisy Mill as they discover high ceilings, bathroom baskets and very thin bedroom walls.

Directed by Sarah Redmond and starring every housemate you've ever lived with, it's a celebration of the joys of shared housing and the people you meet along the way.


It was a scorching 37oC in Adelaide yesterday, but hubby and I braved the heat to attend The Worst Little Warehouse in London. We got front-row seats, and all in all we're happy we made the effort to go out despite the weather. The show features a host of quirky characters, all ably performed by Lala and Robbie, and focuses on the ups and downs of communal living in North London. As a Brit, it was fun to hear all the jokes about the different London areas, although I did wonder how well they'd work for audience members unfamiliar with them. There were also a host of songs along the way, with parody lyrics set to classic musical theatre (and the occasional pop) tunes. It was certainly highly entertaining, and the cast of two gave it their all, dashing from one side of the small stage to the other in a 60-min burst of energy. They sang, danced, and played the keyboard non-stop, despite the stuffy conditions inside the venue. For me, this performance deserves a solid 4.5 stars, which I am rounding up to a five for the sake of my graphics! I'm glad I got to see it.


If you are in Adelaide, the show still runs for a couple more performances over the weekend, so do go and check it out if you can. It looks like they are heading to Melbourne after that.