I'm back! With my holiday behind me, it's back to normal scheduling here on my blog. I did miss a couple of good questions for the Book Blogger Hop while I was away, so I decided to answer them all, in order to fully catch up!

Do you have a favorite classic? When did you read it? High school or as an adult?
I love so many classics, so it's hard to choose just one, especially as my mood at the time can affect my choice. If you twist my arm, though, I'd pick Les Miserables by Victor Hugo, which I read for the first time when I was about fourteen (for my own pleasure, not for school curriculum).

Which author would you most like to interview, and why?
Chelsea Quinn Yarbro, as I'd love to discuss her approach to research for her historical vampire series.

Do you continue with a book even though you aren't liking it?
In general, yes, as I want to give each book a fair chance. Sometimes stories can start badly, but then they make sense/work by the end. I feel I owe it to the author (and to myself) to view the work in its entirety. Luckily I am selective with my choices these days and it's rare for me to decide to read something I end up disliking.

Opening sentence:
It is time that we develop a rhetoric of film.

From page 56:
Everybody speaks of melodrama, often disparagingly, but it's not easy to define it. 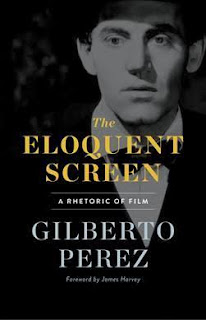 Cinema is commonly hailed as "the universal language," but how does it communicate so effortlessly across cultural and linguistic borders? In The Eloquent Screen, influential film critic Gilberto Perez makes a capstone statement on the powerful ways in which film acts on our minds and senses.

Drawing on a lifetime's worth of viewing and re-viewing, Perez invokes a dizzying array of masters past and present--including Chaplin, Ford, Kiarostami, Eisenstein, Malick, Mizoguchi, Haneke, Hitchcock, and Godard--to explore the transaction between filmmaker and audience. He begins by explaining how film fits into the rhetorical tradition of persuasion and argumentation. Next, Perez explores how film embodies the central tropes of rhetoric--metaphor, metonymy, allegory, and synecdoche--and concludes with a thrilling account of cinema's spectacular capacity to create relationships of identification with its audiences.

Although there have been several attempts to develop a poetics of film, there has been no sustained attempt to set forth a rhetoric of film--one that bridges aesthetics and audience. Grasping that challenge, The Eloquent Screen shows how cinema, as the consummate contemporary art form, establishes a thoroughly modern rhetoric in which different points of view are brought into clear focus.