Just to let you all know, I will be missing the hops for the next couple of weeks as I have a few things on. However, I will be back with you all before the end of the month. :)

Which book do you wish you'd written?
This can vary, depending on my mood and what aspects of a work seem most important to me at the time. However, at present it's the Winternight trilogy by Katherine Arden, with which I am completely in love. (Translation: I'm completely in lust with Morozko.)

Opening sentence:
There was a man called Grim, nicknamed Hairy-Cheek because he was born with a certain perculiarity, and this is how it happened: when Grim's father, Ketil Trout, went to bed with Hrafnhild Bruni's-daughter (as in the tale told earlier), her father Bruni spread a hide over them because he'd invited a number of Lapps in.

From page 56:
Odd went down to the ships to see Hjalmar and tell him that if everything turned out as Skolli had said, they must give him their support. 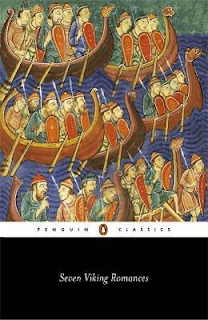 Combining traditional myth, oral history and re-worked European legend to depict an ancient realm of heroism and wonder, the seven tales collected here are among the most fantastical of all the Norse romances. Powerfully inspired works of Icelandic imagination, they relate intriguing, often comical tales of famous kings, difficult gods and women of great beauty, goodness or cunning.

The tales plunder a wide range of earlier literature from Homer to the French romances - as in the tale of the wandering hero Arrow-Odd, which combines several older legends, or Egil and Asmund, where the story of Odysseus and the Cyclops is skilfully adapted into a traditional Norse legend.