Today I am thrilled to announce the release of my latest novel, Blood Is Forever! 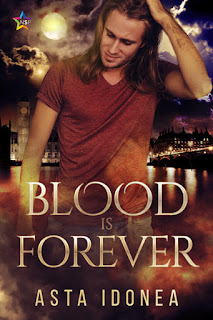 As a fae-vampire hybrid, scorned by all, Holden's life has never been easy. The one bright spot is his job testing blood at supernatural crime scenes. It's routine work, until the day he finds a victim he can't read.

When one murder becomes two, and then three, it's clear there's a serial killer on the loose—one with a penchant for collecting hearts. Finding the bad guy could cement Holden's career, but he's drawing a blank. And it doesn't help that the expert his boss calls in to assist him is the man Holden's been crushing on for years.

With lives hanging in the balance, Holden and Val must solve the case before the killer strikes again. But will they come out with their hearts still intact?

The Road to Murder
The decision to write what is essentially a paranormal murder mystery was not an obvious one for me. I’m not a big mystery reader, nor do I watch many crime shows, save for the occasional piece of Nordic Noir and Hannibal (which I adore).

How, then, did Blood is Forever come about?

Well, I guess it started with Holden Fay. He popped into my head one day, and instantly I wondered who he was and what his story might be. Clearly he was an outcast keen to prove himself and earn his place, but how could he do so? It needed to be something big and impressive, and then it came to me: What if he could solve a murder?

My first thought was that he would be a paranormal half-breed but that he would work in the human world. However, it swiftly became clear to me that such a setup wasn’t going to play right. Among humans, hidden, there was no way to show how his fellow supernaturals treated him. In order to establish him as an outsider, we needed to see him with his own kind. Once I’d reached that conclusion, the idea for a suitable series of murders, and a motive for said crimes, finally came to me.

In truth, at the start, I never planned on the murders becoming so integral to the plot, but as I wrote they took on a life of their own. In what way? Well, that would be telling. You’ll need to read the book to find out!