1.Which is your favourite library (or which would you most like to visit)?
There are some great ones. The British Library in London is awesome, as is the Bodleian, but my favourite purely for beauty of those I've seen would have to be the Klementinum in Prague, Czech Republic.
2. How often do you visit the library?
I visited the library often in my youth--first the library van, which came to our street once a week, and later at school and university. However, in my adult years, I stopped going, the reason being I always had a huge supply of books to read. That's been especially true since I started getting eBook ARCs. However, in the last few months I have been going to the library again. I had my TBR pile under control, and there were certain authors whose work I wanted to try, but I wasn't sure I wanted to pay to buy/keep their books. I suddenly realised the library would be the best option as a way to give them a try with no cost. As it happens, some of the books I've read I loved so much I would eventually like to get a copy for my collection!

Opening sentence:
The amber seemed to glow as Frances held it up to the candle that burned on on dresser.


From page 56:
This morning she felt fury against the prince and her brother. 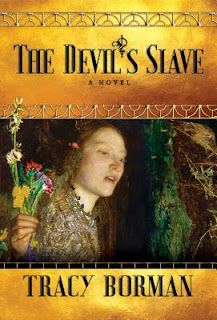 At the end of The King's Witch, the first book in Tracy Borman's Stuart-era trilogy, Frances Gorges was pregnant with the child of her dead lover, Thomas Wintour, executed for his role as a conspirator in the Gunpowder Plot of 1605. Now, in The Devil's Slave, Frances is compelled to return to the dissolute and dangerous court where she has been suspected of witchcraft.Catholics have gone underground in the new Puritan regime of King James I, and yet whispers of conspiracies continue to echo behind closed doors and down the halls of the royal palaces. Against this perilous backdrop, accompanied by her son George and her husband Sir Thomas Tyringham--whom she married conveniently to mask the true identity of her son's father--Frances reunites with her former mistress, the Princess Elizabeth, now of marriageable age, as well as other less friendly members of the court: Prince Henry, heir to the crown who emulates his father's brutality without scruple; Lord Cecil, eager to persecute Frances as a witch even as his own health rapidly declines; and King James himself, ever more paranoid and cruel towards alleged heretics and traitors. Yet a surprising ally emerges in the person of Sir Walter Raleigh, himself a prisoner in the Tower of London. With more lives than merely her own on the line, Frances soon finds herself caught in a spider's web of secrets, promises, and plots.