Between the Lines: Is the Book Always Better? Thoughts on Adaptations

The idea that the book is always better than any adaptations is one that’s been with us for a long time. So much so, we often say it as if it’s a matter of course. But is it always true? And how can we measure an adaptation’s success?

There is a natural desire to assess the suitability of a translation based on its adherence to the original story i.e. whether it stays faithful to every last detail of the text. However, this is to take a very limited view. In fact, sometimes those ‘chapter by chapter’ adaptations don’t succeed, and here’s why: they don’t suit the new medium.

While all art could be said to tell a story, each medium does so in its own way. For example, a book which features a lot of deep character introspection might translate well to an artwork, but it would be difficult to show it on the screen unless you went in for something cumbersome like a voiceover. In another scenario, a very long book might work better as a TV mini-series than as a film, since it would be hard to trim the story to film length.

One of my all-time favourite adaptations is the four-part French TV version of Les Misérables, starring Gerard Depardieu and John Malkovich, which stays close to the book in terms of characters, plot, and themes, while cutting extraneous material such as Hugo’s length digression about Waterloo. On the other hand, one of my least favourites is the film version of the same book starring Liam Neeson, which massacres both plot and characters and has, in my opinion, no redeeming features. 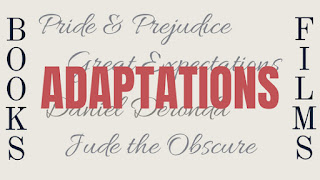 I consider an adaptation to be good if it stays as true to the source material as possible while also making any changes necessary to sit comfortably within the new medium. Take the musical of Les Misérables, for example. It maintains the essence of the plot and characters; however, there are cuts, such as the loss of the connection between Marius and Thénardier, and the complete removal of Marius’ grandfather. Both are important in the book, but keeping them in place in the musical would have made the story unnecessarily complicated and long. It may not be faithful to every line of the books, but as a musical it works well.

There have been a few instances when I’ve thought a story worked better in a secondary format than in its first incarnation. One example is Austenland by Shannon Hale. The book is okay, but the presentation of the characters, and the chemistry between them, worked, I thought, better on screen than on the page. One read-through of the book was enough for me, but I can watch the film again and again, and enjoy it every time.

In general, however, I’d love for us to get into a mindset where we don’t have to say one version of the story is best, but where we can assess each on its own merits, depending on the format in which we are seeing it. That way, a book and its film adaptation could be equally good, though different.

What do you think makes a good adaptation? What are some of your favourite or most hated adapted versions?