Theatre Review: Hugh Jackman - The Man, The Music, The Show 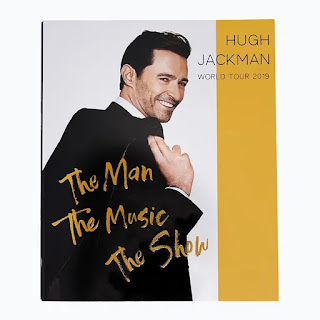 I was super excited when I learnt that Hugh Jackman would perform a concert in Adelaide. I have been a huge fan of his (for both theatre and film) for years, so I couldn't pass up the chance to see him live.

The concert was a blast. Hugh isn't the world's absolute best singer, but he is an amazing entertainer. Energy levels were high from start to finish and his performance in the show included (as well as singing and dancing) stories, piano playing, drumming, comedy and some fun costume changes.

Obviously he included a lot of material from The Greatest Showman, but he also did a good chunk of Peter Allen material (which I loved), and songs from Beauty and Beast, Les Misérables and other musicals, along with a few standards, so overall it was a varied mix.

My only slight complaint was that the sound levels were perhaps a touch on the high side. It was almost painful to the ears when Keala Settle belted top notes in This Is Me.

But that aside, this was a stunning performance and a great showcase for Hugh. There is a final Adelaide performance on Tuesday night, I believe, so catch it if you can!