Today I welcome Timothy Jay Smith to the blog to answer a few questions for Author Interview³.

1) Tell us 3 fun facts about your writing history
I wrote my first play when I was 10 years old. In it, a group of runaway slaves sat around a campfire singing ‘Nobody Know the Trouble I’ve Seen’ as one-by-one they slipped away into the night. It was a harbinger of the notion of social justice that would eventually find its way into all my work.

I started my first novel when I was 12 years old. When I showed the opening chapter to my mother, she said it was “dirty”. I didn’t understand why, but I knew dirty wasn’t good, so that put me off creative writing for a long time.

The first half of my adult life I spent working all over the world on projects to help disadvantaged people. For over two years, I managed a project to assist Palestinians following the 1993 Oslo Accords. One thing I learned was that everyone needed to be at the negotiating table to achieve an enduring peace. So I felt compelled to write a story of reconciliation—A Vision of Angels—that weaves together the lives of four families. If anybody had ever hoped that a book might change the world, I did. Unfortunately I didn’t manage to bring about peace in the Middle East, but I’ve continued writing nevertheless.

5) What are your 3 essential writing tools?
A room with a closed door
A computer
A notepad

6) Where are your 3 favourite places to write?
In my home office
On a train
At a French café

8) What are your top 3 tips for aspiring writers?
Start writing
Keep writing
Don’t ever get discouraged

9) Tell us 3 of your writing plans for the year ahead
Publishing my novel set in Greece, Fire on the Island
Making good progress on my new novel set in Istanbul, The Syrian Pietà
Starting a series of essays that will collectively become my memoir

10) Tell us about your latest release
The Fourth Courier book goes back a long way for me. In 1989, the Berlin Wall fell and Solidarity won the first free election in Poland in over sixty years. In the same year, Mikhail Gorbachev introduced new cooperative laws in the Soviet Union, which was an area of my expertise. I was invited to the Soviet Union as a consultant, which led to my consulting throughout the former Soviet bloc, eventually living for over two years in Poland.

At the time, there was a lot of smuggling across the border between Russia and Poland, giving rise to fears that nuclear material, too, might be slipping across. While on assignment in Latvia, I met with a very unhappy decommissioned Soviet general, who completely misunderstood my purpose for being there. When an official meeting concluded, he suggested we go for a walk where we could talk without being overheard.

I followed him deep into a forest. I couldn’t imagine what he wanted. Finally we stopped, and he said, “I can get you anything you want.” I must have looked puzzled because he added, “Atomic.”

Then I understood. In an earlier conversation, there had been some passing remarks about the Soviets’ nuclear arsenal in Latvia, for which he had had some responsibility, and apparently still some access. While my real purpose for being there was to design a volunteer program for business specialists, he assumed that was a front and I was really a spy. Or perhaps he thought, I really did want to buy an atomic bomb! 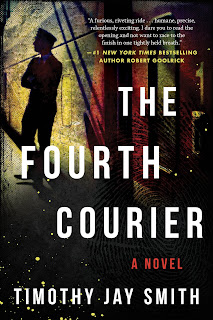 In The Fourth Courier, a series of grisly murders in Warsaw suddenly becomes an international case when radiation is detected on the third victim’s hands, raising fears that all the victims may have smuggled nuclear material out of the recently-defunct Soviet Union.

The FBI sends Special Agent Jay Porter to assist in the investigation. He teams up with a gay CIA agent, and when they learn that a Russian physicist who designed a portable atomic bomb is missing, the race is on to find him—and the bomb—before it ends up in the wrong hands. 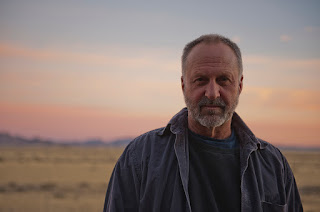 About the Author
Raised crisscrossing America pulling a small green trailer behind the family car, Timothy Jay Smith developed a ceaseless wanderlust that has taken him around the world many times. En route, he’s found the characters that people his work. Polish cops and Greek fishermen, mercenaries and arms dealers, child prostitutes and wannabe terrorists, Indian Chiefs and Indian tailors: he’s hung with them all in an unparalleled international career that saw him smuggle banned plays from behind the Iron Curtain, maneuver through Occupied Territories, represent the U.S. at the highest levels of foreign governments, and stowaway aboard a ‘devil’s barge’ for a three-day crossing from Cape Verde that landed him in an African jail.

Tim brings the same energy to his writing that he brought to a distinguished career, and as a result, he has won top honors for his novels, screenplays and stage plays in numerous prestigious competitions. Fire on the Island won the Gold Medal in the 2017 Faulkner-Wisdom Competition for the Novel, and his screenplay adaptation of it was named Best Indie Script by WriteMovies. Another novel, The Fourth Courier, set in Poland, published in 2019 by Arcade Publishing, has received tremendous reviews. Previously, he won the Paris Prize for Fiction (now the Paris Literary Prize) for his novel, A Vision of Angels. Kirkus Reviews called Cooper’s Promise “literary dynamite” and selected it as one of the Best Books of 2012.