Have you ever wished that there were official government bookish holidays, and that, by law, employers HAD to give their workers a paid day off? If so, what kind of bookish holiday would you like to have?
That does sound good, doesn't it! I wouldn't mind so much what the holiday was, as long as there was one. We have Australian Reading Hour here (it was last week), so maybe on that day we could all leave work an hour early for reading time! I'll start the campaign at once! ;)


From page 56:
The two thousand or so who lay, transformed speedily to garishly attired cadavers, were of the general order of the fairly slain, and the shivering prisoners foiled of more severed French heads, were worthy of the contempt that the lower ranks lavished upon them. 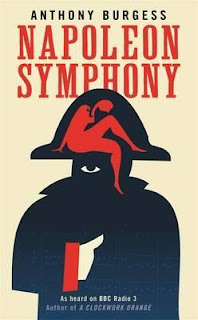 A grand and affectionate tragicomic symphony to Napoleon Bonaparte that teases and reweaves Napoleon’s life into a pattern borrowed—in liberty, equality, and fraternity—from Beethoven’s Third “Eroica” Symphony, in this rich, exciting, bawdy, and funny novel Anthony Burgess has pulled out all the stops for a virtuoso performance that is literary, historical, and musical.