Between the Lines: The Dying Art of Letterwriting - Why I Love my PenPals

In centuries past there were no smart phones. Shocking, I know! :) In a time before emails, SMS, and even phone calls, there was the humble letter. These days, we are used to receiving news—whether general or personal—within seconds, at the touch of button. Previously, you had to wait days, weeks, or even months for the arrival of a letter from friends and family.

In some ways today’s technology is better. Say there’s a fire. Wouldn’t you want to know at once that your loved ones were alive and well? And yet, we’ve lost the personal touch that came with the letters which took time and thought to compose.

Letter-writing was once considered an art form, both in terms of elegant handwriting and in the content and style of the missive. Take a look at correspondence from the 18th and early 19th centuries; it’s beautiful! Or read an epistolary novel from the same period. The style feels ‘flowery’ to us now, but I love the detail, the minutiae of everyday life.

I am trying to recall how old I was when I got my first pen pal. I believe it was about age ten. Amy (with whom I am still in touch online, though we no longer exchange letters) lives in New Zealand. Our grandparents used to be friends, before hers emigrated, which is how we came to know each other. For a while she was my only correspondent, but during my teens I gradually acquired more. Some I met through shared interests online or in newsletters. Others came from the Friendship Books passed between people in letters. 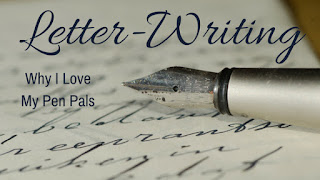 At my height, I wrote to around fifty people, but over time a few dropped off for one reason or another (either completely or to switch to online methods of keeping in touch), and these days I have about thirty regular pen pals. Some write long, chatty letters, to which I try to respond in kind. Others prefer shorter notes, just exchanging news of recent events in our lives. One thing I enjoy about letter-writing is the human touch you get from it. You can share news via email, but it’s not the same as picking up a pen and setting ink to paper.

Another thing I love about being a pen pal is the opportunity it provides to get to know people from various places and cultures. While we usually share some interests, they may also have diverse pursuits, about which I can learn more through their letters. Then there is the fact that such correspondence allows me an excellent means by which to practice my foreign languages. In some cases, it’s the only real practice in them I get since moving to Australia.

But I fear it may be a dying art. While I do still see plenty of Friendship Books being passed around, and the people in them remain keen to find new pen pals, other factors may put a dampner on things. Postage costs keep going up (though the service seems to get worse in correlation), and with it now costing me $3 to send a single letter, it becomes an expensive hobby when you write to as many people as I do. Still, I am determined to continue and enjoy it for as long as I can, as it seems to me a pursuit worth preserving.

Do you write to pen pals? If so, what do you love most about it? If not, is it something you’ve ever considered doing?