Did you go shopping on Thanksgiving Night, Black Friday, or on Cyber Monday? If so, did you buy any books?
No, I didn't. My birthday and Xmas are close, and I always get a ton of new books then, so I tend not to buy books for myself at this time of year. Plus, I indulged last month and bought all 28 volumes of the Black Butler manga, so I needed to be more frugal this month! :)

Opening sentence:
I could have become a mass murderer after I hacked my governor module, but then I realized I could access the combined feed of entertainment channels carried on the company satellites.


From page 56:
I'm also not supposed to snitch on clients to anybody except the company, but it was either that or jump out the hatch. 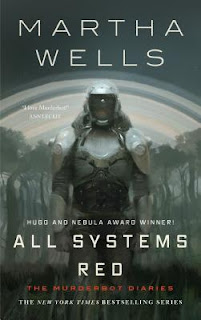 In a corporate-dominated spacefaring future, planetary missions must be approved and supplied by the Company. Exploratory teams are accompanied by Company-supplied security androids, for their own safety.

But in a society where contracts are awarded to the lowest bidder, safety isn’t a primary concern.

On a distant planet, a team of scientists are conducting surface tests, shadowed by their Company-supplied ‘droid — a self-aware SecUnit that has hacked its own governor module, and refers to itself (though never out loud) as “Murderbot.” Scornful of humans, all it really wants is to be left alone long enough to figure out who it is.

But when a neighboring mission goes dark, it's up to the scientists and their Murderbot to get to the truth.