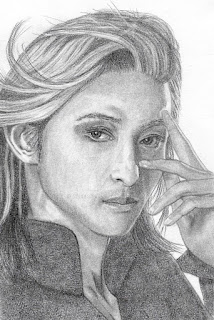 To celebrate Furukawa Yuta being cast as Der Tod in the Toho Stage 20th Anniversary production of the musical Elisabeth in 2020, I did this sketch of him in the role from the promo images from this year's production.
I really wish I could see him perform the role live, but since that's impossible, I will have to hope they film the show next year so I can buy the DVD.

Drawn over 5.5 hours with pencils 7B, 5B, 3B, 2B, & H
Due to my scanner's contrast-killing tendencies, I tweaked the brightness and contrast a little in PS. Otherwise, it is as drawn.