Hi all! It's time for those weekend blog hops once again! The last one for 2019!

What bookish goodies did you get for the holidays?
I received a good book haul this year! I already had eight books from my birthday earlier in the month and for Xmas I received another twenty-one in total (from family and friends).
Rather than list all the titles, which would take a bit of typing, I will post a picture of them below! 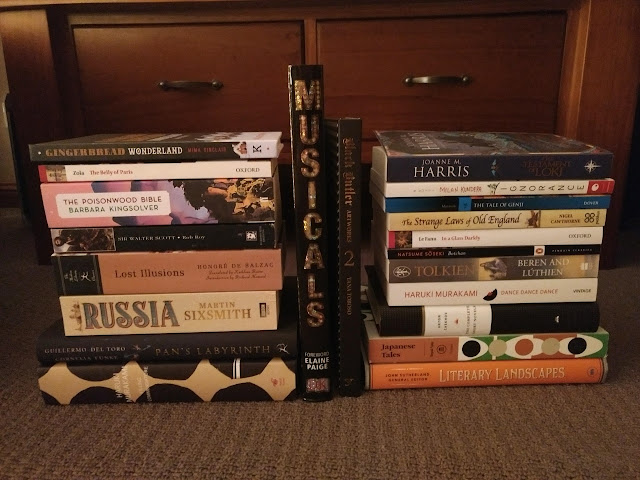 Opening sentence:
"What are you still doing here?" Her tone wasn't harsh, but it wasn't kindly, either. Sylvie was indignant.


From page 56:
Over the centuries the music of any language probably does change imperceptibly, but to a person returning after an absence it can be disconcerting: bent over his plate, Josef was listening to an unknown language whose every word he understood.

A man and a woman meet by chance while returning to their homeland, which they had abandoned twenty years earlier when they had chosen to become exiles. Will they manage to pick up the thread of their strange love story, interrupted almost as soon as it began and then lost in the tides of history? The truth is that after such a long absence "their memories no longer match." We always believe that our memories coincide with those of the person we loved, that we experienced the same thing. But this is just an illusion. Then again, what can we expect of our weak memory? It records only "an insignificant, minuscule particle" of the past, "and no one knows why it's this bit and not any other bit." We live our lives sunk in a vast forgetting, a fact we refuse to recognize. Only those who return after twenty years, like Odysseus returning to his native Ithaca, can be dazzled and astounded by observing the goddess of ignorance firsthand.