Do you think that readers make better employees, as opposed to non-readers? Why or why not?
That's a difficult question as many other factors could weigh in. Obviously if you work in a library or bookstore you would be able to do your job better if you were well read, but perhaps if you were, say, a waitress it would not impact your work much one way or the other. That said, reading is supposed to help with things such as empathy, as well as the fact it allows you to acquire knowledge in different areas, so it could add to the so-called soft-skills.
Nevertheless, I would not advocate it being a factor in giving someone a job, especially in non-book-related fields, as that could be discriminatory, since there may be reasons (medical/socioeconomic etc.) why one person is not able to read as much as another.

Opening sentence:
What are ideals? There are innumerable answers to that question.


From page 56:
Dazai darts out of the car without even listening to my warning. I can't allow a rookie to go off on his own during his first shoot-out. 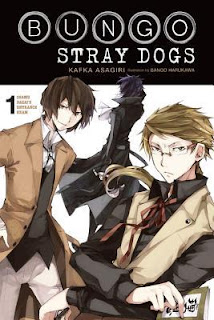 Doppo Kunikida is an idealist and a strait-laced detective at the Armed Detective Agency, an organization that takes on dangerous jobs that even the police won't handle. Everything in his life is progressing as planned until one day he's ordered to watch over the new guy, Osamu Dazai, a suspicious fellow of unknown origin who is obsessed with the thought of suicide. While investigating an unusual case involving a so-called haunted building, they find several of the missing people from another investigation. However, before they can find out how these cases connect, they are attacked by the mafia's Ryunosuke Akutagawa, sworn enemy of the agency! This is the beginning of a hopelessly inseparable relationship between two detectives. A battle of Abilities erupts in the shadows of Yokohama!