Do you have any New Year's Blogging Resolutions?
Not particularly. Just to keep putting out regular content as usual and to continue my participation in these hops. I could say 'try to comment more on others' blog posts', but I know from previous years that's a losing battle. I simply lack the time to leisurely read a lot of other blogs alongside maintaining my own and all my other hobbies and chores. *sigh*

Opening sentence:
From the time I was a boy the reckless streak that runs in my family has brought me nothing but trouble.


From page 56:
Now that I thought about it, though, I realized that most people actually encourage you to turn bad. 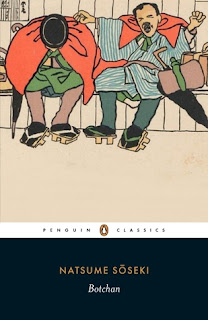 Botchan is a modern young man from the Tokyo metropolis, sent to the ultra-traditional Matsuyama district as a Maths teacher after his the death of his parents. Cynical, rebellious and immature, Botchan finds himself facing several tests, from the pupils - prone to playing tricks on their new, naïve teacher; the staff - vain, immoral, and in danger of becoming a bad influence on Botchan; and from his own as-yet-unformed nature, as he finds his place in the world. One of the most popular novels in Japan where it is considered a classic of adolescence, as seminal as The Catcher in the Rye, Botchan is as funny, poignant and memorable as it was when first published, over 100 years ago.