What is your go-to recommendation for someone who doesn’t read often?
I don't really have a one-size-fits-all book recommendation, especially if the person to whom I am recommending is not a regular reader. I wouldn't want to suggest something that didn't suit them, thereby putting them off books more. I would want to talk to them first, maybe find out what films they like etc., to get a sense of which genre they might prefer, and then I'd make a recommendation from there.

Opening sentence:
Most people--by which I mean most of us who are part of Japanese society--graduate from school, then find work, then, after some time has passed, get married.


From page 56:
When the train started moving she waved to me from the window. I raised my hand to the level of my ear, but when the train went out of sight, I felt awkward all of a sudden and stuffed it in the pocket of my raincoat. 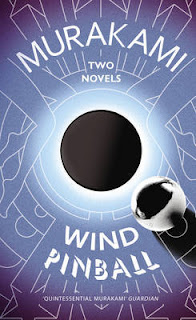 Hear the Wind Sing and Pinball, 1973 are Haruki Murakami’s earliest novels. They follow the fortunes of the narrator and his friend, known only by his nickname, the Rat. In Hear the Wind Sing the narrator is home from college on his summer break. He spends his time drinking beer and smoking in J’s Bar with the Rat, listening to the radio, thinking about writing and the women he has slept with, and pursuing a relationship with a girl with nine fingers.

Three years later, in Pinball, 1973, he has moved to Tokyo to work as a translator and live with indistinguishable twin girls, but the Rat has remained behind, despite his efforts to leave both the town and his girlfriend. The narrator finds himself haunted by memories of his own doomed relationship but also, more bizarrely, by his short-lived obsession with playing pinball in J’s Bar. This sends him on a quest to find the exact model of pinball machine he had enjoyed playing years earlier: the three-flipper Spaceship.