What were some of the most memorable books you read as a child? What made them memorable?
Hmm. Ones I recall include things like The Very Hungry Caterpillar, The Jolly Postman, the Puddle Lane series, Where the Wild Things Are... Then, a little later, series like The Babysitters' Club. However, I'm not sure I can say what made them memorable. I don't really recall plots and character from things like Puddle Lane and The Babysitters' Club; I only remember having owned and read them.

Opening sentence:
Based on the many times he had ridden in cars driven by women, Kafuku had reached the conclusion that most female drivers fell into one of two categories: either they were a little too aggressive or a little too timid.


From page 56:
I couldn't speak. Not being able to find the right words at crucial times is one of my many problems. 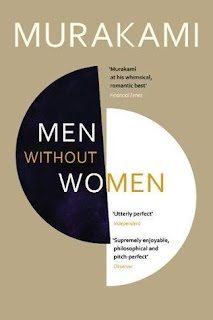 Across seven tales, Haruki Murakami brings his powers of observation to bear on the lives of men who, in their own ways, find themselves alone. Here are vanishing cats and smoky bars, lonely hearts and mysterious women, baseball and the Beatles, woven together to tell stories that speak to us all.

Marked by the same wry humor that has defined his entire body of work, in this collection Murakami has crafted another contemporary classic.