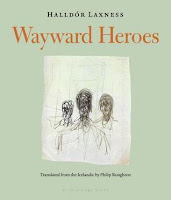 
I am a huge fan of Halldór Laxness' writing and Wayward Heroes is no exception. I had already read a translation of the original sagas upon which this is based, but Laxness' version has a wonderful flow and is a beautiful retelling, showing events in a different light from the original tales. So while it's familiar in a way, there was also something new to discover. This will be a delight for any Laxness fan, but it is also a brilliant read for saga fans looking for a different take on the classic tales. Highly recommended.