If you own an eBook, would you also purchase a print copy?
There might be many factors at play with this question. Generally, no. However, if the book was part of a series and I ended up getting other volumes from that series in print, then I might want to complete the set. The only other time I've ended up with both is if I received the eBook as a free ARC and loved it so much I wanted a print copy for my shelf (especially if it was a NetGalley ARC, as those expire). Outside of such situations, though, I don't have the money to buy the same book twice.

Opening sentence:
If we were to enter by night the main square of a small town, let's call it Kükenstadt, in Lower Saxony (judging by the architecture and the signs above the shops lining the square), we would find the atomosphere typical of such towns after midnight.


From page 56:
Marie-Sophie was afraid he would order her to go and shovel coke and entrust the cook, or goodness knows who else, with the task of nursing the invalid, which was unthinkable. 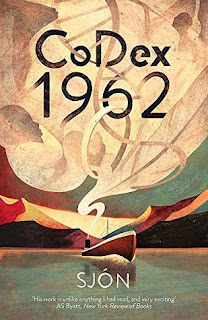 Jósef Loewe can recall the moment of his birth in August, 1962 and everything that has happened since - or so he claims to the woman listening to the tale of his life...

A love story
He begins with his father, Leo, a starving Jewish fugitive in World War II Germany. In a small-town guesthouse, Leo discovers a kindred spirit in the maid who nurses him back to health; together they shape a piece of clay into a baby.

A crime story
Leo escapes to Iceland with the clay boy inside a hatbox, only to become embroiled in a murder mystery. It is not until 1962 that his son Jósef can be born.

A science-fiction story
In modern-day Reykjavík, a middle-aged Jósef attracts the interest of a rapacious geneticist. Now, what lies behind Jósef's tale emerges. And as the story of genesis comes full circle, we glimpse the dangerous path ahead for humankind.