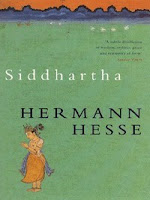 No other novel in the canon of Hesse's fiction matches the immense appeal of Siddhartha for the modern reader. Inspired by Hesse's profound regard for Indian philosophy and written in prose of almost biblical simplicity, it chronicles the quest of the Brahmin Siddhartha for the conquest of suffering and fear. His tortuous road leads him through the temptations of luxury and wealth the delights of sensual love, and the sinister threat of death-dealing snakes, towards the fulfilment of his destiny as a ferryman guided by the all-knowing voice of the running river...

This new expanded edition includes a comprehensive and illuminating preface by Donald McCrory that combines Hesse's biography with the writing and meaning of Siddhartha. McCrory also provides a select bibliography, an index of people and works influential to Hesse and a glossary of Sanskrit, Hindu and Buddhistic terms for newcomers to the novel.

I picked up Siddhartha expecting it to be heavy-going, yet feeling like it was one of those books I *should* read. However, I was pleasantly surprised to find it swift, easy reading. The story considers the pursuit of wisdom, fulfillment and enlightenment through the medium of Indian philosophy and religion, yet it never gets bogged down in doctrine as I'd envisaged. Instead, it is an entertaining (yet still thought-provoking) tale of a man going through life and making discoveries about himself alone the way until he reaches a point where he is at peace with himself and the world around him. Perhaps it's not a book I would rush to reread again and again, but it's certainly one I'm glad I picked up and read once, and it thoroughly deserves its place as a modern classic. It was a solid 4-star read for me.