Today I am joined by Julie Lynn Hayes, author of a number of books including the ongoing Captivations series.

1) Perhaps you could tell us a bit about yourself and your writing in general?

I’ve been writing since about the age of nine, reading since I was two. I’ve always been fascinated by words and stories. I’m one of those people who’s always reading something, even if it’s just the billboards that I pass, or the promos on the vehicles on the street. The process of writing is fascinating to me, and I find it very exhilarating, especially when it’s going very well. I can’t imagine doing anything else. I’m writing in the romance genre right now, but I have other interests as well, including historical and young adult, and my desire is not to be known as a romance writer, per se, but as a writer, if that makes sense. 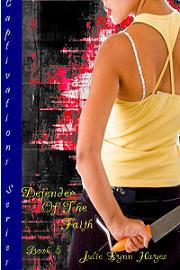 2) Part 5 of your excellent Captivations series has just come out. For those who are not yet familiar with the series, can you tell us a bit about the overall storyline?

Captivations is the name of a nightclub in New Orleans that is owned by the Deacon brothers, Avery and Ben, who just happen to be vampires. In the time in which this story is set, there is a balance that is maintained among those of the supernatural persuasion, a peace which is kept by cooperation. The vampires are in a secret alliance with the Church, and have been for years. Avery and Ben were born in 17th century France, so they’ve been vampires for quite some time. As the story begins, they acquire a new day keeper, but Jillian Nichols is more than Avery bargained for, and they go head to head from the moment they meet.

3) What or who were your main inspirations in writing Captivations?
Basically, I love vampires, and I loved the idea of vampire brothers, so I set them in New Orleans, which is a place I would love to visit.  I started thinking about nightclubs and jazz and developed it from there.  I researched the city and placed the nightclub in the Fauborg Marigny, on an existing street, Frenchmen Street. And then I just took it from there.

4) How long do you expect the series to run? Do you have an ending in mind or is it still open at the moment?

To be honest, I have no idea. The ending is still quite open.  I like doing this in that it would be hard for anyone to second guess me, since even I don’t know what’s ahead.  Well, I do know some things, yes, so I have an idea of what is coming up, but not the ending.

5) Do your characters come to you off the bat or do you draw inspiration from people you know? Are any of the characters in Captivations inspired by real life figures?

Some characters come to me fully developed, others I have to work at.  Yes, some are inspired by people are know. For example, Max Montague is a lot of me.  His friend Cat is my friend Kitty, and so on.
I think that maybe there is some of Nathan Petrelli in Avery Deacon; if I were to ever get to have a series done, he is my first choice to play him. I think Avery is my dream vampire—hot, sexy, devastatingly charming, yet with hidden depths. Maybe he’s a more mature Damon Salvatore, with less snark. Jillian is sort of like Ripley in the Alien films, she’s strong, independent, no nonsense, and here to do her job. But basically, I think they are my own creations, rather than based on people I know or have seen.

6) What other stories have your been working on lately? What other new releases can we expect to see from you in the coming months?

I’m always working on a lot of things. Is there such a thing as writer’s ADHD? If so, I think I have it. I’m working on a new series which comes out in May called Forbidden, as well as sequels to some existing stories: a new Max story, the second Dark Love, a sequel to Leo, and a sequel to Sex on the Beach, as well as a Young Adult series, and the prequel to Captivations.  Leonardo di Caprio is a Vampire is being released on April 30th, and For Love of Max releases June 4th. Both of those are from Silver Publishing.


7) Where can readers pick up copies of the Captivations series and where can they find out more about you and your work?

The best place to find Captivations is at the Wicked Nights site:http://wickednights.info
The best place to find out more about me and what I’m about and my work is at my blog: http://julielynnhayes.blogspot.com
Thanks for your time, Julie. The Captivations series is published by Wicked Nights Publishing and part 5 comes out tomorrow.
Thank you so much for having me, Nicki!  It was fun!

Giveaway
Julie has generously offered one lucky reader the chance to win a free copy of Part 1 of the Captivations series to get them started with these great books.  Or, if the winner already has this title, they may pick any other title they desire from Julie's current releases at Wicked Nights Publishing.
This giveaway is open internationally to followers of this blog. Both current and new followers are eligible, so click that follow button now. Then comment below to enter the giveaway. Don't forget to leave an email address so that we can contact you if you are lucky enough to win!

Entries close at midnight on Saturday 19th March 2011 (South Australian time) and the winner will be notfied the following week. Giveaway now closed. Thanks to those who entered.