The Shadow of the Wind by Carlos Ruiz Zafon - Book Review 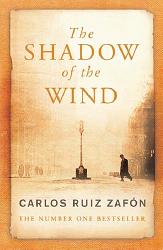 
Barcelona, 1945-just after the war, a great world city lies in shadow, nursing its wounds, and a boy named Daniel awakes on his eleventh birthday to find that he can no longer remember his mother's face. To console his only child, Daniel's widowed father, an antiquarian book dealer, initiates him into the secret of the Cemetery of Forgotten Books, a library tended by Barcelona's guild of rare-book dealers as a repository for books forgotten by the world, waiting for someone who will care about them again. Daniel's father coaxes him to choose a volume from the spiraling labyrinth of shelves, one that, it is said, will have a special meaning for him. And Daniel so loves the novel he selects, The Shadow of the Wind by one Julian Carax, that he sets out to find the rest of Carax's work. To his shock, he discovers that someone has been systematically destroying every copy of every book this author has written. In fact, he may have the last one in existence. Before Daniel knows it his seemingly innocent quest has opened a door into one of Barcelona's darkest secrets, an epic story of murder, magic, madness and doomed love. And before long he realizes that if he doesn't find out the truth about Julian Carax, he and those closest to him will suffer horribly. (Goodreads Synopsis)

Wow - what a great book. I've had a great run lately with picking excellent books and this one is no exception. I just can't believe it took me so long to get to it.

There is the feel of a strange gothic thriller about this piece. Every page turn adds to the intrigue and suspense. To begin with the story seems fairly simplistic, but then Zafon just keeps adding layer after layer, building up this masterful tale.

The characters are wonderfully presented and Daniel captures the reader straight away. The plot is well devised and realised and the mystery keeps building. I did guess the twist marginally before it was revealed, but that didn't detract from my enjoyment - if anything, I was thrilled when proven right.