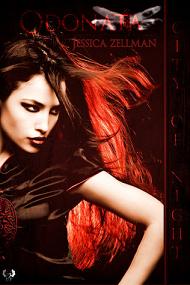 Vampires may think they are the ultimate predators...but they're wrong.

Forty years ago, Katrina Templair forfeited her human life and became an Odonata, a creature that preys on vampires. Her world is black and white. Odonata are good. Vampires are bad. Humans...who cares about humans?

But everything changes when she rescues a human. Abbey Marquez believes Katrina can enjoy more than the bloodlust that comes from killing vampires. The opportunity to prove Abbey's theory arises in the form of a vampire gang who takes the term "tourist trap" a little too literally.

Katrina will not allow humans to be bartered as food, but defeating the gang means facing her own inner demons and four decades worth of nightmares. (Goodreads Synopsis)
For the first couple of pages, I wasn't sure that I'd enjoy this book, but I was happy to be quickly proven wrong.One of the things I enjoyed most about this piece was the element of originality presented by the idea of the Odonata. It grabbed my attention and helped save the piece from becoming 'just another vampire story'. With so much vampire fiction out there now, it is refreshing to find something that stands out and feels new.The character of Katrina grew on me steadily as the story progressed and I found her relationship with Grey believable and not over the top as some vampire romances can be. I loved Abbey as a secondary character, but would have liked to have learned more about her emerging talents; although a note from the author at the end of the novel indicates that this may happen in a future release in the series, which is good news.The plot moved along nicely and there was plenty of action to support the more reflective passages and the flashbacks. The writing style was clear and easy to read, helping the flow of the story.A very enjoyable read and I for one will certainly be keen to check out any future releases in the series. I would recommend this for vampire fiction fans.