Today, I welcome back my friend and fellow author, Julie Lynn Hayes. Julie, over to you!


And the Beat Goes On… Are Novellas the new Novels?
You’ve seen them, I’m sure. Series by familiar authors seemingly coming out faster than the speed of light—ever wonder how? Do these authors have magic fingers? Or do they pre-write their series years in advance and dole them out in monthly installations for the public’s edification?

Neither. Take a closer look at these title and what do you see? They are not novel length. They are, in fact, novellas.

Whereas at one time you could not sell a novella to save  your life, except perhaps in an anthology, now the market is filled with them. And invariably they form part of a series, so that you’ll want to come back next time and pick up the newest chapter.

Why is this? What has happened to the writing and the writer? Why have we exchanged quality for speed?  I blame the emergence of e-publishing for one thing, and the ease with which anyone can get published. Writers who would never have made it in the days when the old way to submit a piece of writing was on paper now find their submissions swallowed whole because of a growing market of readers who don’t want to take the time to read an actual book, they just want to skim through something fast and move on. I blame the readers as well, and I also blame the writers.  They want to write less and get paid more by getting published more often with less to say.

So the perfect solution? Write a series! End each chapter with the promise of more hotness and sweet seduction in the volume ahead. Right now shifter series are quite popular, they come in all shapes and sizes, with their own individual canons. The one thing they have in common is beautiful men to die for. Ever see an ugly man in a romance novel? Not bloody likely. Although, I must say that you’re more likely to find average looking guys in the novels of SL Danielson, she doesn’t subscribe to the model looks which most authors use as their Bible. In fact, her hero Bernard is 46, single and overweight in her Bernard: Memoirs of a 46 year old Bellhop. Not your typical romantic bill of fare.

So what does this mean? Are we following the same path that Sesame Street took when it introduced the concept of fast food education to our toddlers—give it out in small doses and keep changing the subject? Have we contributed to the short attention span of the modern reader, and fostered his inability to read a regular sized novel, much less anything of great length, such as War and Peace, Moby Dick, or Gone With the Wind? If so, this is a very disturbing trend indeed.

At one time, you couldn’t get published below 60,000 words. Now everyone below that level is being published. Should we be worried? And what is this doing to the quality of what is being read?

Personally, I think this is leading to the dumbing down of the novel. The standards of quality have definitely slipped with the advent of more e-publishers than you can shake a stick at because frankly it doesn’t require the outlay that a traditional publisher does. You can even publish yourself, if you’re so inclined. What does this mean? Look at some of the titles that are being published and you’ll see.  Read some of the blurbs, and the excerpts—if you can stomach them. The quality has definitely gone downhill. Some of it is pure unadulterated sex, with an odd plot point thrown in for good measure. And some of it is downright offensive. The writers are so concerned with describing their characters getting it on that some basic concepts have gone by the wayside—ideas such as plot, characterization, theme, and description. They’re writing the bare basics, what I’m going to call the he said, she said method of writing. He said this, she said that, and then they fell together on the bed.

All they are is interconnecting parts. Some of it is below the level of some high schoolers. And yet not only does it sell, but it gets good reviews. Why?

Because people don’t want to take the time to read quality any more. They don’t want finesse, the subtle plot, the characterization. They want slam bam thank you ma’am. They’ve developed a taste for beer but they call it champagne. It’s quite discouraging.

So, what’s the solution? I wish I knew. It’s not like we can stick with the high end publishers, their days are becoming numbered due to the emergence of the e-book: it’s popular, easy to read and cheap. Plus it’s green. No trees are destroyed in its creation.

Don’t think that I’m saying all the modern writers are bad, or that even the ones that primarily write novellas are either, ‘cause I’m not. But there are a lot of bad ones out there. The scary thing is that people like them, as if quality no longer matters. And yes, I am speaking primarily of the romance market.

Personally, I don’t intend to change the way I write to fit anyone or anything, because then it’s not me and what’s the use in that? I want to be enjoyed and read for myself, not for whom I’m pretending to be.  Do I expect other authors to change? No, not really. My hope is that readers will become more critical of what they read, but I’m not holding my breath. I’ve noticed a great reader loyalty, even among crap authors.

Do I think we’ll ever see a re-emergence of the novel? One can only hope. I’d rather see people read better and longer than settle for the slapdash in-and-out quickies that currently flood the market. I’m not saying that the novella isn’t a legitimate form of writing, but it isn’t the novel, and shouldn’t be mistaken for it. Are novellas the new novel? I hope not.

Oh, and what about this growing trend toward threesomes and moresomes?  I think I’ll save that rant for another day.

Thanks for having me, Nicki. As always, it’s been a pleasure.


Julie's latest release is For Love of Max, a sequel to her earlier excellent novel, To The Max! Here's the blurb and a little cover pic to tempt you! 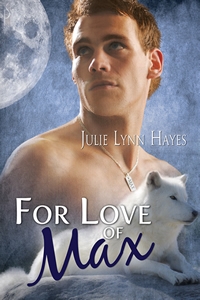 Life is truly beautiful!  Richard actually asked me to marry him, do you believe it?  Of course there’s a small hurdle we have to cross – namely that gay marriage isn’t legal here in Missouri.  But it’s a start, right?

Things are looking up for us, now that I know the truth about Richard.  Our careers are doing well, we’re blissfully happy together, and Mother has given us her blessing!  My sister Diana is going through boyfriends like some people change clothes, I wonder if she’ll ever find Mr. Right? Cat’s cousin has turned out to be a real interesting character, and the most interesting thing is – he’s a werewolf!  And more disturbing than that, I think that maybe my father (that shadowy figure who’s never figured in my life) might just be someone named Jason.  It’s a long story.

Just when I thought I had things figured out, they change, and I find out that what I thought I knew was just so much nonsense.  In other words – lies.  Who can I trust?  Other than Richard, of course. And what should I believe?  And why does it seem like the world is trying to shake me out of my lycanthropic closet?

What’s a gay werewolf to do?