Today I am joined by author David M Brown via Bewitching Book Tours. Over to you, David! 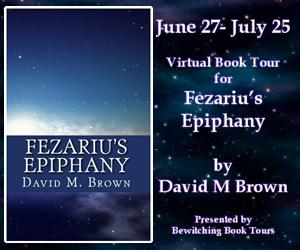 I love to read about writers’ environments, whether they write at a desk or pop out to the local cafe away from the distractions of home. Though I have written on the train or at a cafe, I prefer to do all my writing at home and tend to have two favoured locations.
My wife Donna and I share our lovely home with six rescue cats – Kain, Razz, Buggles, Charlie, Bilbo and Frodo. Incidentally, I would like to add at this point that the only cat we named was Charlie because the alternative – John – just didn’t seem right but that’s another story. Obviously we chose to have the cats come and live with us, it wasn’t a case of they were here already and we thought we’d see how well we all got on.

Trying to write when you have six cats running about the place is something of a challenge I have to say. When the writing mood takes me I’ll tend to sit in the living room in my late grandfather’s rocking
chair and with my laptop, a comedy omnibus will be on Gold or music will be playing in the background (usually The Decemberists). How much writing I get done in one sitting is all down to the mercy of the six cats.

Problems to contend with include breaching the rules by going on the kitchen side, finding their way behind the television or having to get up to let Kain in or out of the house. Trying to write first thing in
the morning or early evening is nigh on impossible. Six hungry cats do not sit quietly and give you a demonstration in synchronised patience; they’ll let you know that it’s time to tend to their needs and to put the laptop down.

If it’s late at night I’ll either stick to the living room or head up to bed to write in peace. Donna likes the cats in the bedroom with us but I tend to have them shut out. I simply don’t sleep otherwise! This
should be my most productive part of the day, I suppose, but it depends how tired I am at this point. I’ve been known to stay up very late writing blogs or chapters of the latest novel but it all depends how
much energy I’ve used up during the day trying not to be outwitted by the cats. If Donna and I ever get a house in the country I will definitely be having my own study with a lock and key and, you guessed
it, no cat flap! 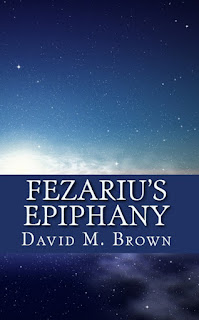 Fezariu's Epiphany Book Blurb:
"The White Oak, Clarendon’s oldest brothel, lured and destroyed men by the thousands. Fezariu was different. He had never been drawn by the White Oak’s vices but the brothel had still ruined him when he was just a boy.

Salvation came in the form of the Merelax Mercenaries – Elenchera’s most prestigious hired hands. They gave Fezariu the chance to escape from his past. Immersed in the world of dangerous assignments in the colonies Fezariu longed to forget everything about his childhood but only in facing the past would he ever be free of it."
Book trailer: http://www.youtube.com/watch?v=mPgcNNLMBvY