Excerpt - Protector (Anniversary of the Veil # 1) by Vanna Smythe 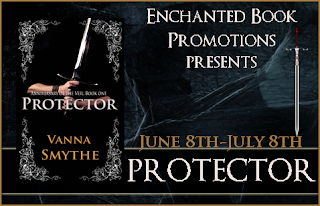 Today I am hosting an excerpt post from Protector, a new book by Vann Smythe.

Read on for more information and a sneak peak.

Kiyarran just wanted to become a Protector of the Realm, a member of an elite order of fighters. Strange and powerful magical abilities awaken inside him once his wish comes true. The Priesthood that secretly controls the realm see his skill as a threat, and Kiyarran begins to learn that little about life as a Protector is what he thought it would be. To top it off, Kiyarran is falling in love with Princess Issiyanna, his friend of many years.

Issiyanna faces and arranged marriage, but she has been dreaming of another man, her one true love. Now her long gone mother is calling to her, promising she will return and take Issiyanna to meet the man from her dreams.
The world is split in half by a barrier called the Veil. A terrible sacrifice was made to put it in place and now, as the 1000th Anniversary of the Veil draws near, a second sacrifice is called for to keep it in place.
Both Kiyarran and Issiyanna are needed for the Anniversary. Even though they only just learned of the Veil and neither know the role they must play … 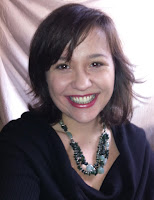 Vanna Smythe is the author of Protector, the first book in the Anniversary of the Veil fantasy series. She has been writing creatively since her early teens, though one could say her creative writing efforts started long before that. While still in kindergarten, she once tore up a library book to make alphabet soup, and has been fascinated with what words can do, the pictures and worlds they can create, ever since. Book two of the Anniversary of the Veil series, Decision Maker, is due out in Autumn, 2012.

“I’m so happy, Grisella.” Issa threw her arms around the old serving maid as she entered her chambers. “Father has managed to postpone my marriage.”
Grisella returned the hug, patting Issa on the back. “That’s wonderful news child. But I still say marriage to Thomma won’t be as horrid as you imagine. We were all in your place once. Such are things and such is the way.”
“I will sooner stay alone than be married to someone I don’t love.” Issa released her maid. She sat down by the mirror, untied the knot in her hair and started brushing it out. “But I will not stay alone much longer. My love is coming.”
The gorgeous young lord from across the sea would be in Cer’Ine any day now. Last night Issa dreamt of him standing near the shore. He was turned away from her, gazing across the sea with a traveling trunk by his feet.
Grisella looked up from where she was turning down Issa’s bed. “Who might this be, girl?”
“The handsome man I dream of most every night now. In the dreams we hold hands and stare into each other’s eyes for hours and days, and I can see all his secrets as he can see all of mine. And at other times we sit side by side and he has his arm around my shoulders and I lay my head against his chest and listen to his heartbeat, and I know all will be well until the end of days, just as soon as we are together.”
Grisella walked over and took the brush from Issiyanna. Her maid’s light brown eyes, for the moment not obscured by the folds of her face, were fixed on Issa’s reflection in the mirror in front of them. She opened and closed her mouth a few times, before finally saying, “Issiyanna, child, you are experiencing the Dreams of the Other Half. It is no more than that.”
“What are Dreams of the Other Half?”
Pity filled Grisella’s eyes as she looked away and started brushing Issa’s hair. “Your hair truly is lovely in the winter. The moisture in the air weighs it down and gives such magnificent shape to your curls. I almost do not want to brush them out.”
“The dream, Grisella?”
Her maid stopped brushing and looked at Issa again. “All right…I will tell you…I’d hoped your father had already done so by now…your mother never had the time…”
Issa waved her hand impatiently at the maid’s reflection. “Just tell me, Grisella.”
“We all have such dreams, Issa, in our youth and before we are wed. I too dreamt such dreams when I was your age. The boy I dreamt of had dark brown hair and beautiful green eyes, the color of the river after a hard rain and once the sun shines on it again. He looked much like Kae, really. He stood over two heads taller than me and his arms were strong and steady as he held me in the dreams. I always believed he must be from the north, from some village at the foot of the Mountains of Giants, where neither men nor women fear the twilight.” Grisella’s eyes were unfocused, as though she was seeing all the way back into her youth. “But after the priests wed me to dear, sweet Bern, the dreams stopped, and the longing vanished.”
It didn’t seem so to Issa. She could still hear the longing in the old woman’s voice and see it in her eyes.
Grisella resumed brushing her hair. “It’s said that the person who appears to you in these dreams is only a mirror reflection of your own self, but of the opposite gender. Once they start, it means that you are fit to be wed. You will see, when you are wed you will no longer dream of this young lord.”
Her love’s eyes were the color of the summer sea at dawn and his hair the color of wheat fields just before harvest. Issa’s own hair was the color of honey, her eyes the color of the sunlit summer sky. He was coming to her. When he did, a ray of the strong love they shared in the dreams would pass from one to the other, and back again. Then both would know that they were the one they seek, the one they long for and wish to wed and lie beside until the end of days.
Issa would be wearing her pale green silk dress when he came, the bodice of which was cut in a precise arrowhead shape. It accentuated her bosom, yet did not reveal too much and was lined with tiny pink pearls only found in the shells that lined the most dangerous parts of the cliffs. All Issa had to do was wait. Now that her wedding had been postponed, she had more time.
Grisella put down the brush and handed Issa her nightgown, “Here, child, it is getting late. Things will look brighter once twilight gives way to dawn.”
“Yes, yes, and such are things. Truly Grisella, there is good and light even at night. Why should we fear it?” Issa knew the answer before the maid gave it. What the priests taught, the lower folk believed.