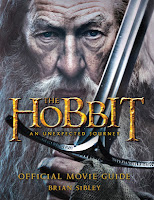 Enter Bilbo Baggins’ world through exclusive interviews with director Peter Jackson, Martin Freeman, Ian McKellen and all the principal cast and filmmakers, who share film-making secrets and tales of what it was actually like making movie magic in Middle-earth.

Lavishly illustrated with hundreds of behind-the-scenes photos of the actors, locations, sets, creatures and costumes, The Hobbit: An Unexpected Journey Official Movie Guide has been produced in collaboration with the filmmakers who have brought J.R.R. Tolkien’s classic novel into breathtaking three-dimensional life. (Goodreads Synopsis)

This is a great companion book for the film, with information on various aspects of production and lots of great photos and images. It follows the whole creative process from the acquirement of rights to the film, right down to the making of wigs and Hobbit feet, and you get to hear from producers, actors and backstage crew alike.

I can highly recommend this book for fans of the film(s) and those interested in the film-making process.