Today, I welcome author Clinton Festa to the blog to share an excerpt of new release Ancient Canada and to offer a special giveaway for readers.... 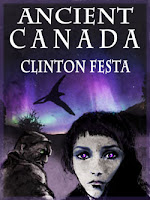 Ancient Canada
Lavender has the ability to see life and death in all its forms.  It is a gift that led to her exile alongside sister Marigold.  The two journey through an alternate Arctic encountering various characters and creatures along the way.  Because of her persecution, Lavender's story had to be told.  Marigold begins this story as lead narrator, but quickly hands the pen to the various characters and creatures, who narrate their encounter of the sisters.  Together it forms an epic for an alternate Canada, as told by a prince, and orphan, a fugitive bog man, Feathermen, and many others.  The mythological story of Ancient Canada may be unlike anything you've read in 1,000 years.

From Chapter 9, The Commandant's Encounter

Clinton Festa began his writing career as a 'Lunatic,' writing for the campus humor magazine the Cornell Lunatic. Since his undergraduate days, he has also been a cartoonist, a circulation editor, and written numerous online humor articles.On the serious side, Clinton has authored many technical courses to promote aviation safety. As a pilot with over 3,500 flight hours, his seminars have earned him the FAA's 'Representative of the Year' award in 2010 for the Greensboro, North Carolina district.Clinton began writing his first novel, Ancient Canada, while working as both a corporate pilot and the chief pilot for an air cargo company. He drew on various sources, from ancient literature to conversations with his wife. The novel best classifies as fantasy fiction, specifically an epic drama, with a revolving narrator much like Canterbury Tales. But Rome wasn't built in a day, and neither was Ancient Canada. Much like the characters' journey through their known world, Clinton wrote his tale of mythology over several years as his aviation career took him to various states and Canadian provinces.


Clinton has kindly offered one paperback (US only) and two e-copies of Ancient Canada to three lucky readers. To enter, please fill out the Rafflecopters below.
Anyone over 13 years of age can participate
To enter just fill in the Rafflecopter below