Today is release day for my new book Souls for Sale. This PNR MM work includes the short story 21st Century Demon (previously seen in Wayward Ink Publishing's Of Heaven and Hell anthology) and its novella-length sequel, Hell to Pay. 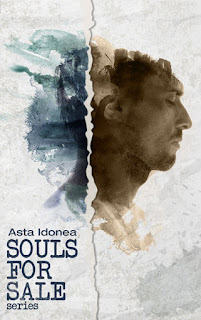 
21st Century Demon
It should have been an easy job: a contract signed and a new soul earmarked for Hell. But when suave demon deal-maker Saul chooses nerdy Thomas Ives as his next target, events take an unexpected turn. The lines between business transaction and pleasure blur, and Saul must decide whether he cares more for his professional reputation or the soul he just condemned to eternal damnation.

Hell to Pay
The contract was destroyed and Tom's soul saved from Hell. Or so they thought.
Demon deal-maker Saul and his mortal love, Thomas Ives, find themselves on the run when the other demons take none too kindly to Saul's bending of the rules. With the denizens of Hell on their heels, Saul and Tom must fight to stay one step ahead, knowing that if they're caught there's only one direction they're headed: down.
When Heaven decides to get involved, Saul's actions are no longer a mere bureaucratic misdemeanour but the basis of a factional confrontation. And now only one questions remains: to whom does Tom's soul truly belong?

A Spark of Hell-Fire—Writing Souls for Sale

Souls for Sale obviously started life with the short story, Twenty-First Century Demon. That piece came into my mind all but fully formed the moment I read the anthology call on Wayward Ink Publishing’s website. I glanced over the brief, and Saul popped into my head and gave a hearty wave. I knew at once what he was like and how his story should unfold, and it was one of the quickest first drafts I’ve ever done as everything was laid out in my imagination from the get-go.
The end of that story, though satisfying enough for a short, left several questions unanswered, and it wasn’t long after acceptance of the piece for the anthology that I began to ponder a continuation. Sometimes as a writer you create a character who really speaks to you—someone to whom you feel such a connection you can’t let them go. That’s happened to me twice so far in my writing career, and Saul is one of them. I needed to know how things would work out for him and Tom, so I started to jot some notes.
I’ve always seen Saul as part demon–part trickster god, with his sexual obsessions and roguish ways. I wanted that aspect of his character to remain intact, but I also knew he needed to grow and change within the novella if the story was going to work. Transformation is a common theme with tricksters, so I made good use of that in Hell to Pay.
I wrote Souls for Sale as a fantasy action romance with a hint of a coming-of-age tale, as both characters have to adapt and make allowances if they want their unconventional love to survive.