Today Anne Barwell joins me on the blog to share her latest release, the MM historical Winter Duet

Thanks for hosting me today, Nicki.

Winter Duet, which will be released from DSP Publications on 27th December, is book 2 of my WWII Echoes Rising series. Although I’ve written the books so they can be read without having read the previous books, the story continues events from the first book in the series Shadowboxing. The third and final book Comes a Horseman will be published by DSP Publications in August/September 2017.

When I first got the idea for this story I knew it would either be a series or one very long book. I decided a series would be easier to write/read, especially as the story easily lends itself to be split into three parts. While Shadowboxing took place in Berlin in 1943, Winter Duet picks up the action a couple of months later, as the characters travel across Germany toward Switzerland.

Although Winter Duet is a continuation of the original story, I didn’t want to disadvantage readers who pick up the books out of order. Therefore I’ve started this story with a brief prologue that brings new readers up to speed without being an information dump. It also did double duty in having those events reminisced by a different perspective—that of Kristopher’s sister, Clara, now in SS custody.  Margaret Huber—who has her own motives for finding Kristopher—tries to get information from Clara, but....

With this release being the 2nd edition of the book, I was writing the next one in the series while I was editing this one. I had to keep both books in my mind while remembering not to reference something that hadn’t happened yet. However, on the flip side, it made continuity for Comes a Horseman much easier. Usually I have a little more writing distance between books so I’m continuously flipping through the previous one in a series to check details so it all meshes together. 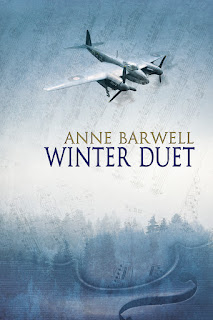 Hunted for treason and the information Kristopher carries, he and Michel leave the security of their safe house to journey across Germany toward Switzerland. Caught in a series of Allied bombings, they stop to help civilians and narrowly escape capture by German forces.

While investigating a downed aircraft in the Black Forest, the two men discover an injured RAF pilot.  After they are separated, Kristopher and the pilot are discovered by a German officer who claims he is not who he appears to be. Determined to find Michel again, Kristopher has to trust the stranger and hope he is not connected to those searching for him and the information he carries. Meanwhile Michel is intercepted by one of the Allied soldiers he met in Berlin. His help is needed to save one of their own.

Time quickly runs out. Loyalties are tested and betrayed as the Gestapo closes in. Michel can only hope they can reach safety before information is revealed that could compromise not only his and Kristopher’s lives, but those of the remaining members of their team—if it is not already too late.

Kristopher dropped to his knees and examined the boy. His eyes were glazed over, and he flinched when Kristopher touched him. “He must have hit his head when he fell,” Kristopher said. He brought his hand away from the boy’s temple. It was covered in blood. “He needs help. I can’t do much for him here, apart from just try and stop the bleeding.” He quickly opened his satchel and pulled out a short length of bandage, bundled it into a wad, and held it against the wound. Although it probably wouldn’t be enough to stop it, it was better than doing nothing. Head wounds tended to bleed, didn’t they? It didn’t mean it was something serious, but it could be.

He let out a quick breath. Damn it. He wished he’d paid more attention when he’d watched Clara at work. Why had he agreed to disguise himself as a medic? In this situation when that was exactly what was needed, he was next to useless.

“We can’t stay here,” Michel said. “Can you tie something around the bandage so it keeps the pressure on it when we move him?”

“Keep pressure on the wound while I look.” Kristopher searched around in his bag, ripped some more of the bandaging material, and tied it quickly. His hands were shaking, but at least there didn’t seem to be any blood seeping through the original cloth he’d put over the wound. “I think that should hold it for now.”

Michel handed Kristopher the flashlight and then lifted the boy into his arms. “What’s your name?” he asked softly when the boy opened his eyes and looked up at him.

“Fritz,” the boy replied, his voice wavering. He put his arms around Michel’s neck and clung to him. Thankfully, he seemed more alert than he had a few moments before.

“Hello, Fritz. I’m Michel, and this is Paul,” Michel said. “We’re going to keep you safe, I promise.”

“You promise?” Fritz’s earlier confidence was gone. “I didn’t think it was so dark. I know this place. I shouldn’t have tripped.” He glared at the ground. “Stupid thing. Stupid, stupid. Everything looks different.” He sniffled loudly and wiped one dirty hand over his face.

“Do you remember the way to the shelter, Fritz?” Kristopher asked. Michel was watching Fritz carefully, holding the boy close to him. His grip had tightened at the first sign of Fritz’s distress.

“I don’t need to put you down,” Michel reassured Fritz. “You can still guide us while I’m holding you.”

“I don’t want to walk.” Fritz bit his lip. He looked around and then pointed to a street to their left. “If we go down there, it’s only about ten minutes away.”

They’d never reach the shelter in time before it closed.

“There isn’t one closer?” Michel asked.

“It’s the one I know about,” Fritz said, somewhat defensively. “Mutter told me if something happened I should go to it.”

“Where’s your mother now?” Kristopher asked. The light from the flashlight was dying quickly. They had to hurry.

“I don’t know. She went to get my baby sister, but she never came downstairs.” Fritz stuck his chin out. “I waited like she said, even when I heard the loud noises and people crying.”

“You live around here?” Kristopher hoped Fritz’s family had survived this. They’d have to try and reunite them or at least find someone who could look after him before they left Stuttgart.

Fritz nodded. Whatever his wound, it seemed as though it was definitely superficial or he wouldn’t be talking as much as he was. “I went looking for her, and I couldn’t find her.”

“You sound much better, Fritz. Do you think you could walk?” Michel asked.

“I don’t want to lose you and Paul too,” Fritz said. He let Michel put him down and then put one small hand into Michel’s.

“You won’t lose us,” Michel promised. “Keep holding my hand, and Paul will look after the flashlight. We can work together.”

“Michel’s very good at working together,” Kristopher told Fritz. He shone the flashlight around. The farther out into the street they got, the more rubble there was. It wasn’t safe to move too quickly, and at this speed they’d never reach the shelter before daylight. He glanced up at the sky. Most of the flashes of light now seemed to be focused toward the city center.

“I’m wondering if it’s safer to stay here but get as far away from the buildings as we can and wait for daylight.”

“We don’t know how long this raid is going to last,” Michel said, “but we need to make a decision.” Something creaked and groaned to the side of them. “Move!” Michel yelled. He picked up Fritz and ran back the way they’d come. Kristopher didn’t stop to see what was going on behind him. He followed.

Moments later, more rubble hit the street where they’d just been standing. If they’d stayed there, they would have been buried in it.
Kristopher shone the flashlight on it and shivered. “I think finding the shelter is the least of our problems,” he said. “We need to get out into the open. It’s not just more bombings that could kill us, but the buildings that are already damaged.”

“I know a place,” Fritz said after Michel put him down. “I’ll show you.” He took hold of Michel’s hand again. “You and Paul are soldiers.” He pointed to the red cross on Kristopher’s arm. “You’ll stay and help look after all the hurt people, won’t you? Vater is a soldier too. He’s fighting at the front. Mutter says he’s very brave.”

“Yes, we’ll stay and help,” Michel said before Kristopher could say anything. He squeezed Fritz’s hand. “We’ll also help you find your mother, or at least someone who can look after you.” He looked over at Kristopher and gave him a questioning look.

“Of course we will,” Kristopher said, wondering why Michel felt he’d even had to ask.

Anne Barwell lives in Wellington, New Zealand.  She shares her home with two cats who are convinced that the house is run to suit them; this is an ongoing "discussion," and to date it appears as though the cats may be winning.

She is an avid reader across a wide range of genres and a watcher of far too many TV series and movies, although it can be argued that there is no such thing as "too many." These, of course, are best enjoyed with a decent cup of tea and further the continuing argument that the concept of "spare time" is really just a myth.