Today I welcome Antonia Aquilante to the blog to answer a few questions for Interview³ and to share a little about her latest release, The Sorcerer's Guardian.

1) Tell us 3 fun facts about your writing history
I’ve been coming up with stories for as long as I can remember, long before I knew how to write them down. In a writing class when I was twelve, I turned in a sixty page murder mystery for a short story assignment and decided that I would be a published author when I grew up. I am terrible at thinking up titles, so much so that my mom thought of the title for my first book when I couldn’t (Thanks, Mom!).

3) Name 3 of your literary influences
Nora Roberts because she wrote the first romance I ever read and because of her attitude toward writing. When writing is going bad, I always think about what she said: “You can fix anything but a blank page.” And I keep writing. Tamora Pierce because her Song of the Lioness Quartet grabbed me when I was eleven and I’ve been making up my own fantasy worlds ever since. And JK Rowling because of her amazing worldbuilding and characters that people are passionate about.

4) Share your 3 favourite books
I can never answer this question—there are too many books that I love, and I can never choose! How about 3 of my favorites from last year? (Still not an easy choice!) A Gentleman’s Position by KJ Charles, Hexbreaker by Jordan L Hawk, and Strong Signal by Megan Erickson and Santino Hassell.

5) What are your 3 essential writing tools?
Laptop, journal (I use a new one for notes on each story and sometimes write by hand too), pens (sometimes purple, but that isn’t required)

6) Where are your 3 favourite places to write?
My desk and my couch are where I write most often. I got a lot written out when I was on vacation at the beach in South Carolina last year. I wrote out on the balcony, and it was so nice. I wish I could write there all the time!

7) Name 3 items on your writing wish list
I’m still a pretty new author, so I probably want everything! There are absolutely publishers I dream of having contracts with. I would love to see my books out in audio and translated into other languages. And I really need to learn to write faster so I can get more of my ideas onto the page.

8) What are your top 3 tips for aspiring writers?
Learn your craft, and keep learning as you keep writing. Read everything (books inspire your creativity and help you learn your craft). Don’t give up!

9) Tell us 3 of your writing plans for the year ahead
I have two wips I want to finish—one is a contemporary with slight paranormal elements that I’ve been writing on and on for several months and the other is a fantasy romance that I’ve just started. It’s completely separate from the world of my Chronicles of Tournai series, and I’m excited to get into it. And the third thing is to go back to Tournai and write the sixth book in the series.

10) Tell us about your latest release
My latest release is The Sorcerer’s Guardian. It’s fantasy romance and the fourth book in the Chronicles of Tournai series, though all the books in the series have a standalone plot and romance (with HEA!) so you don’t have to read in order. The Sorcerer’s Guardian is the story of Savarin, the most powerful sorcerer in Tournai, and Loriot, captain of the royal guard. Tournai’s magical protections are weakening, and Savarin is tasked with figuring out why. Loriot is tasked with protecting him while he does. They clash and fight their attraction and ultimately fall in love, all while figuring out to protect their country. 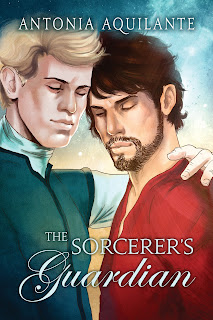 Savarin, the most powerful sorcerer in Tournai, has honed his Talent through years of study and made magic his life. Among the wealthy and noble circles he moves in, no one would suspect the handsome, refined, and arrogant sorcerer’s humble beginnings, which is how Savarin prefers it. Tournai’s princes task Savarin with studying and strengthening the spells that protect the principality from magical attack. They are complex, centuries old, and exactly the type of puzzle Savarin is eager to solve. To his annoyance, the princes insist Loriot accompanies him.

Loriot worked his way up the ranks of the royal guard to captain and takes pride in his service. He must obey the princes’ orders to protect Savarin, despite believing his skills would be best used elsewhere. And despite his wariness of magic. UnTalented himself, he has learned not only the benefits of magic but also its potential for harm—and how to counter it. Loriot and Savarin clash during their journey, but there’s another reason for the tension between them, and passion develops into feelings neither expected. But Savarin must still fortify Tournai’s magical barrier, and his only solution endangers both him and the royal family.

Giveaway
Comment on this post to enter the draw to win a Chronicles of Tournai tote bag and other swag!

About the Author
Antonia Aquilante has been making up stories for as long as she can remember, and at the age of twelve, decided she would be a writer when she grew up. After many years and a few career detours, she has returned to that original plan. Her stories have changed over the years, but one thing has remained consistent - they all end in happily ever after.

She has a fondness for travel (and a long list of places she wants to visit and revisit), taking photos, family history, fabulous shoes, baking treats which she shares with friends and family, and of course reading. She usually has at least two books started at once and never goes anywhere without her Kindle. Though she is a convert to ebooks, she still loves paper books the best, and there are a couple thousand of them residing in her home with her.

Born and raised in New Jersey, she is living there again after years in Washington, DC, and North Carolina for school and work. She enjoys being back in the Garden State but admits to being tempted every so often to run away from home and live in Italy.