Today I welcome Steven Manchester to the blog, to share his new release, Ashes. 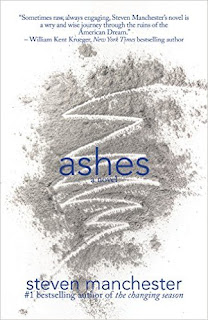 Middle-aged brothers Jason and Tom Prendergast thought they were completely done with each other. Perceived betrayal had burned the bridge between them, tossing them into the icy river of estrangement. But life – and death – has a robust sense of irony, and when they learn that their cruel father has died and made his final request that they travel together across the country to spread his ashes, they have no choice but to spend a long, long car trip in each other's company. It's either that or lose out on the contents of the envelope he's left with his lawyer. The trip will be as gut-wrenching as each expects it to be and revealing in ways neither of them is prepared for.

At turns humorous, biting, poignant, and surprisingly tender, Ashes puts a new spin on family and dysfunction with a story that is at once fresh and timelessly universal.

About the Author
Steven Manchester is the author of the #1 bestsellers Twelve Months, The Rockin' Chair, Pressed Pennies, and Gooseberry Island as well as the novels Goodnight, Brian and The Changing Season. His work has appeared on NBC's Today Show, CBS's The Early Show, CNN's American Morning, and BET's Nightly News. Three of Manchester's short stories were selected “101 Best” for the Chicken Soup for the Soul series. He lives with his family in southern Massachusetts.