Today I welcome Susan Mac Nicol to the blog to answer a few questions for Interview³ and to share her latest release (and a giveaway).

1) Tell us 3 fun facts about your writing history

I started writing because of a crush I have on Benedict Cumberbatch.
My first submission came back with so many edits it looked like red liquorice strings had attached to the page.
I’m an avid researcher and have stayed in a circus and a lighthouse as part of doing my research for a book I was writing.

5) What are your 3 essential writing tools?
Coffee
My laptop
The Internet

6) Where are your 3 favourite places to write?
At my local coffee shop - I love the hustle and bustle
Curled up on my sofa at home
In a friend’s incredibly atmospheric study

8) What are your top 3 tips for aspiring writers?
Write what you’re passionate about, not for the market.
Write no matter what anyone says about your work - if it makes you happy, its right for you.
Take constructive criticism on board and hone the craft of writing.

9) Tell us 3 of your writing plans for the year ahead
I’m hoping to self-publish my eleventh stand-alone novel called Living on Air. I still have to finish this though.
I want to write the ninth book in my Men of London series, called Survival Game.
I want to finish a film script I’m working on with LA actor Nicholas Downs. It’s a film adaptation of my latest release, Sight Unseen.

10) Tell us about your latest release
Sight Unseen was based on an original script by Nicholas Downs, a well-known actor in LA. Nicholas and I met online, chatted to each other. I watched his films, loved them, he read my books, loved them. Nicholas asked me to read his script to see if I liked the story with a view to writing a full-length novel for him. He then asked if I wanted to collaborate with him to turn this novel into a screen-play, based on the book. I liked the idea very much, although as a writer, it needed a lot of story development to make it into an actual novel that people would read. So that’s what I did. I wrote the story you see under that gorgeous cover, changing Nate into a temperamental sculptor and Cody into an art gallery owner/surfer dude and Jon into an underwear model. This book is a collaboration and not a traditional co-writing effort. Nicholas helped me with the location settings (as he lives in LA), he helped me with the Americanisms, and spelling, and steered me on track when I needed advice as to how certain events might turn out in his view.

So there you have it. The screen play however will be written by us both, in more of a traditional co-writing way, and we obviously hope it will work for us. We work very well together, kindred souls, so I’m sure this will be easy enough.

The story is a gripping tale of lovers fighting against the odds, and one of universal appeal about rejection and acceptance and finally finding what is real and true. 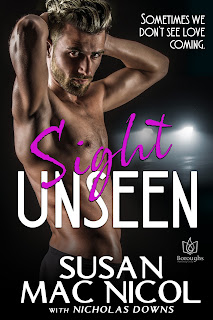 Tragedy brings together a reserved but brilliant sculptor and an outgoing gallery owner, friends whose love was sidetracked but was always meant to be deeper.

SoCal natives, Nate and Cody have been friends since childhood. Both knew they were different—and the same. At seventeen, a stolen weekend in the Florida Keys drove their connection deeper and hotter than either could imagine. They were meant to be together. Then, for reasons only Nate knows, suddenly they weren’t.

They’re still friends. Best friends. But they’ve moved on and found other partners. The yearning remains, however, despite the long-ago secret that drove them apart, when tragedy strikes, both men find themselves in the dark. They must grope their way back to who and what they are…which they will find in each other’s arms. Sometimes, losing one’s sight can open one’s eyes—and heart.


Giveaway
Comment below to go in the running for an e-copy of Sight Unseen and another book from Susan's backlist. 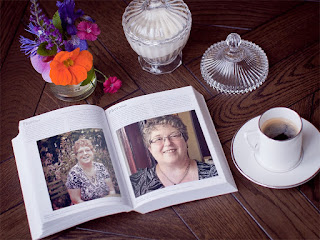 About the Author
Susan Mac Nicol is a self-confessed bookaholic, an avid watcher of videos of sexy pole dancing men, self-confessed geek and nerd and in love with her Smartphone. This little treasure is called ‘the boyfriend’ by her long suffering husband, who says if it vibrated, there’d be no need for him. Susan hasn’t had the heart to tell him there’s an app for that…

She is never happier than when sitting in the confines of her living room/study/on a cold station platform scribbling down words and making two men fall in love. She is a romantic at heart and believes that everything happens (for the most part) for a reason. She likes to think of herself as a ‘half full’ kinda gal, although sometimes that philosophy is sorely tested.

In an ideal world, Susan Mac Nicol would be Queen of England and banish all the bad people to the Never-Never Lands of Wherever -Who Cares. As that’s never going to happen, she contents herself with writing her HEA stories and pretending, that just for a little while, good things happen to good people.