When you feature a book in your posts, do you include a book cover?
Yes. If one is available, I'll always use it, whether in reviews or for posts such as this one, where I highlight my current read.

Opening sentence:
The fae lay on the ancient flagstones, candlelight dancing over his handsome features.

From page 56:
And yet his oddly feral beauty mesmerized me, his perfect gaze stirring some long-dormant part of my brain--the part that whispered of forest trysts on beds of moss, fingers digging into dirt with wild abandon. 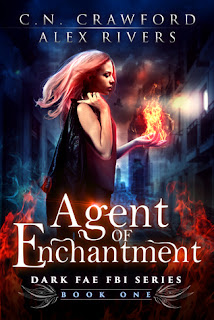 The fae live among us. And one of them is a serial killer.

I thought this would be a simple profiling case. Just another Jack-the-Ripper wannabe, prowling London’s streets, searching for easy kills. I was wrong. This killer is fae, and he’s as elusive as smoke on the wind. But I’m an FBI profiler, and it’s my job to track him down.

It doesn’t matter that one of the main suspects--a lethally alluring fae--is trying to seduce me… or kill me, I’m not sure which. I won’t be stopped, not even when panic roils through the streets of London, or when the police start to suspect me.

As I close in on the killer, I follow him to a magical shadow realm that’s like nothing I ever expected, where I’m hunted like prey. Fine. Bring it on. I’m an FBI Agent. And it turns out I have magical powers of my own.