Today I welcome August Li to the blog to answer a few questions for Interview³.

1) Tell us 3 fun facts about your writing history
1.    I used to write manga scripts.
2.    I once killed someone in a story and they died for real. Coincidence I’m sure.
3.    When I first subbed to Dreamspinner Press, a publisher I really wanted to work with, I misguidedly attempted to write a holiday story for their yearly Advent Calendar. It wasn’t accepted as such—too many sword fights and human sacrifices, I guess—but they liked it enough to contract it.

2) Describe your writing style in 3 words
Intricate, cinematic, and bloody.

3) Name 3 of your literary influences
The Classics—I was a lit major (among other things), so everything from Greek and Roman literature to Shakespeare, Romanticism, and so on have influenced me.
The British graphic novel writers of the early 90s, especially Alan Moore and Neil Gaiman.
It would be dishonest not to credit modern fantasy author for the their influence. Some of my favorites are Ursula K. Le Guin, Steven Erikson, Robin Hobb, Scott Lynch, Jim Butcher of course…. This could become a long list.

4) Share your 3 favourite books
Just three? That’s very difficult, and it’s variable depending on my mood. The first three that come to mind at the moment are Jonathan Strange and Mr. Norrell by Susanna Clarke (that one will always, always make the list), The Charioteer, and either Howl’s Moving Castle or Sandman. Or Preacher. So many graphic novels.

5) What are your 3 essential writing tools?
My MacBook.
Paper and pencils, because I like to draw the characters, maps of the setting, weapons, armor, and anything I have trouble seeing clearly. I also use Photoshop for sketching.
My cat for company.

6) Where are your 3 favourite places to write?
I live at the beach, and as nice as that sounds, sand and computers really don’t get along. So writing tends to happen at home on the couch, maybe in a Starbucks. I do get ideas while on the beach, though.

7) Name 3 items on your writing wish list
Well, I’m working with my dream publisher, and I got my dream cover artists, so the only one left is a lot of money. Or maybe to have my work made into a manga series.

8) What are your top 3 tips for aspiring writers?
Haha, I hate this question because I don’t consider myself any kind of an expert. I guess always try to learn. Read as much as you can and analyse why some books work better than others. Learn about language and how the tools at your disposal can be used to express your ideas. Observe human nature and especially the constants that transcend time and culture.

9) Tell us 3 of your writing plans for the year ahead
I hope to complete the sequel to Fox-Hat and Neko, which will be the autumn to that novel’s summer theme, so more contemplative and somber. It’ll be set in Aomori Prefecture, in a rural community in decline. These books have color palettes in my mind, and this one is dark red, sienna, black, and gray. It has a murder mystery and forest demons.
I am probably getting ahead of myself, but it would be great to wrap up my Blessed Epoch series. It’s at five books and getting close to 800,000 words. Probably two more books will finish it. At least that’s the plan.
The last one is a secret. It’ll be a genre-bending blend of traditional fantasy, urban fantasy, cyberpunk, and thriller. Lots of guns. My goal is sensory overload!

10) Tell us about your latest release
Here’s the blurb for Gone By the Board, which is sort of my love letter to the sea. There’s a romantic element, but it’s PG and is more of a contemporary fantasy. 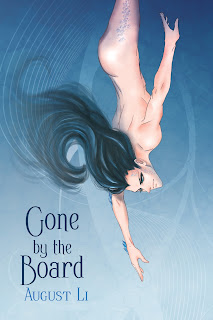 The sea is full of jealously guarded secrets, but everything washes up eventually….
Betrayed by a trusted partner, Nathan figures he might as well be lost and heartbroken in the sunshine, and he heads to the coast of South Carolina, to stay with a friend and find a new direction for his life. But despite his efforts, he is lost in the fog, unable to find a guiding light and sometimes unable to find a reason to go on. His only respite from depression and anxiety is the soothing rhythm of the tides and the comfort he draws from proximity to the water.
When the sea sends a lifeline in the form of a strange and beautiful man, it’s easy for Nathan to ignore all the things that don’t add up about his new friend. But the tides can turn without notice, and it’s those mystical traits that will either finally lead Nathan safely to shore or drown him in confusion and despair. 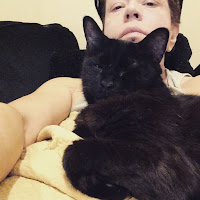 About the Author
August Li is an author and artist. He’s a lover of cats, foxes, books, video games, Asian ball-jointed dolls, and all forms of creative expression. All of his extra time and money go toward traveling and exploring as much of the world as possible.