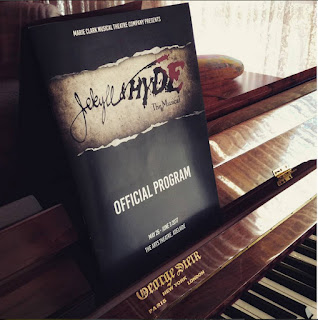 
Last night I saw the opening performance of Marie Clark Musical Theatre's production of the musical Jekyll and Hyde.


From the outset, I should note that this is an amateur production, and that fact should be taken into account when reading my comments.

The show got off to a somewhat shaky start with David MacGillivray's rendition of I Need to Know. Mistiming his entry appeared to throw him, and led to some lyric confusion and pitching issues. However, as the first act progressed, he regained his confidence, particularly once he'd completed the initial transformation into his Hyde persona. At first, he sounded like Gollum as Hyde, but he quickly toned back on that. He really came into his own in the second act, giving an excellent performance, most notably in the Confrontation scene. As a side note, this is the first production of this show that I've come across that didn't use long hair up vs. long hair down to distinguish between Jekyll and Hyde; MacGillivray relied on vocals and physicality to swap between the two during the song.

Moving on to the female leads, both Ashley Muldrew and Sarah Wildy offered strong performances in the respective roles of Emma and Lucy. The standout vocals of the night came from Ashley Muldrew, who is clearly the best-trained singer in the company. Sarah Wildy has an excellent belt, but one thing let down her portrayal of Lucy for me: her accent. She would have done better not to attempt one as it detracted from her otherwise good performance, coming and going from one song to the next. Initially, I had assumed she intended a lower class London accent but had ended up somewhere closer to Liverpool; however, a comment on this post has informed me, Mancunian was intended all along.

The supporting cast did a good job, though the women's vocals were generally stronger and more on pitch than the men's. The scene transitions were a tad noisy at times but otherwise fluid and well handled. The set looked good, as did the costumes, and the orchestra performed admirably.

Overall, this was an enjoyable performance of one of my favourite musicals. Not as polished as a professional production, naturally, but an extremely good amateur effort. Plus, this was the first night and, given the definite improvement in all the cast as the show progressed, I imagine the remaining performances will be even smoother, now that first-night nerves are out of the way.

For anyone in Adelaide wishing to see it, the show runs at the Arts Theatre on Angas Street until 3 June. Visit the Marie Clark website for more information.

NB: I have made a slight edit to the end of the fourth paragraph of this review to make my meaning clearer, in response to a comment on the post.