What is the most fun part/aspect of being a book blogger?
Getting to share my love of books with like-minded people!

NB: I won't be with you next week. :( I have some stuff on and, though I could set up the post in advance, I won't get a chance to add my link to any of the linky lists, so it seems a bit pointless posting anything. I will, however, join you all again as usual the week after.

Opening sentence:
"I was wondering," Sammy said, tentatively, as they paused between courses at La Venezia, "if you should think of getting a new photograph of yourself. Something just a tiny bit more up-to-the-minute perhaps..."

From page 56:
A sandbag from the pile on the corner had burst, the hessian rotted from a year of of rain and dog urine, and one of the waiters was sweeping the grit into the gutter. 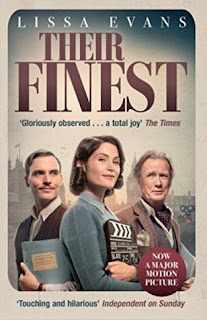 It's 1940. In a small advertising agency in Soho, Catrin Cole writes snappy lines for Vida Elastic and So-Bee-Fee gravy browning. But the nation is in peril, all skills are transferable and there's a place in the war effort for those who have a knack with words.

Catrin is conscripted into the world of propaganda films. After a short spell promoting the joy of swedes for the Ministry of Food, she finds herself writing dialogue for 'Just an Ordinary Wednesday', a heart-warming but largely fabricated 'true story' about rescue and romance on the beaches of Dunkirk. And as bombs start to fall on London, she discovers that there's just as much drama, comedy and passion behind the scenes as there is in front of the camera.